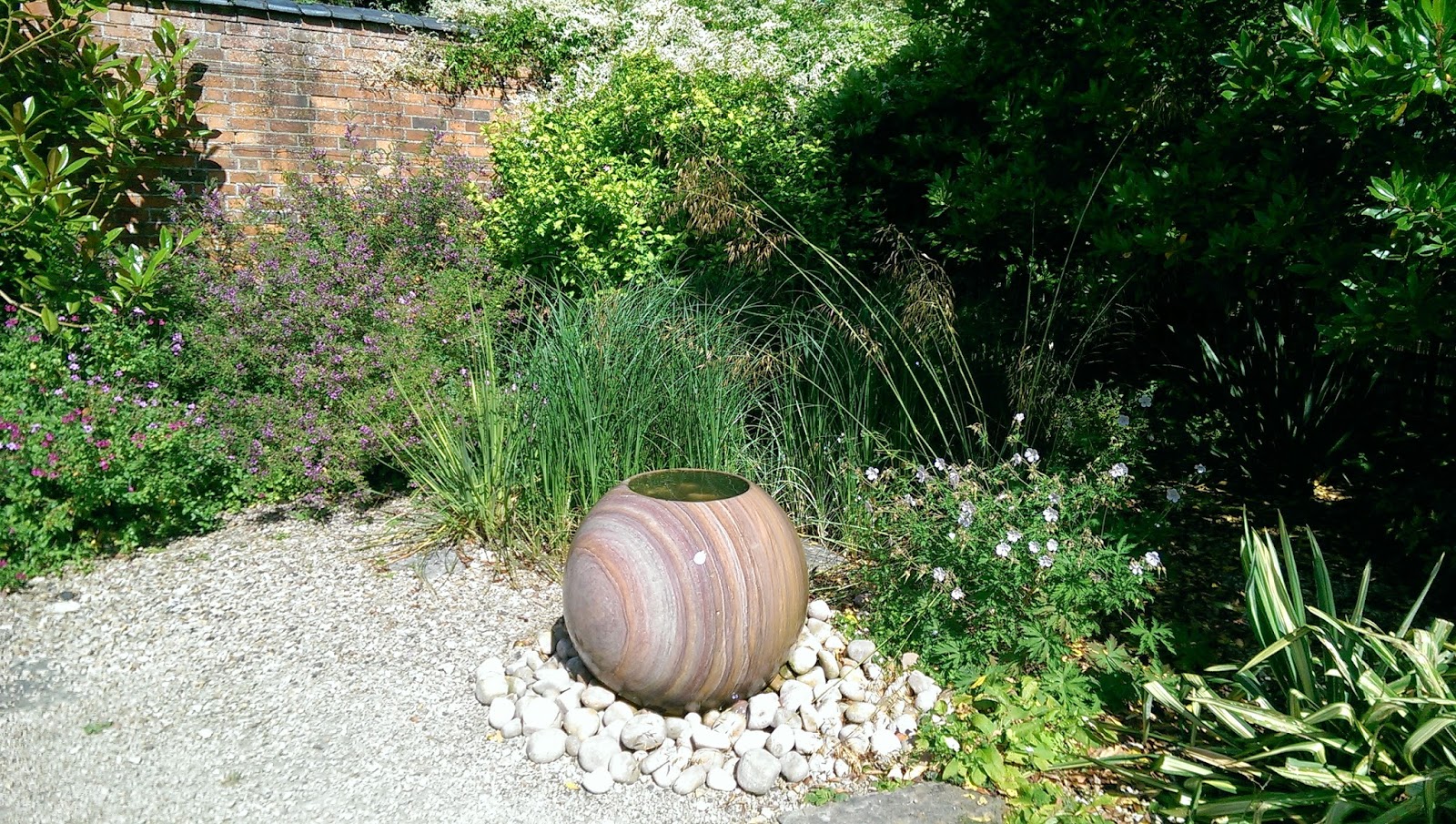 This year i have been making an effort to get back to my life's passions, for various reasons in my personal life id lost my way. So far this year though i have reconnected with my old friends from Ryton where i worked, visited Great Dixter, bumping into another gardener i know and now going to see Waterperry's garden.
Ive also taken to travelling by train a lot, its made for some amusing situations, like the chap at Charing cross murdering a rendition of "feelings" on a trumpet. So bad it was good.
Random chats with strangers which have brightened my day no end, seeing the countryside and the changing seasons in a way i could never do if i was driving. Its also given me free time to catch up on reading a pastime i had almost given up on in the last four years!

I reached Waterperry's a little late but one of the gardeners very kindly came and picked me up from the bus stop, i'd spoken to her a few times on Twitter, my forays into social media another story in its own right. We hurried to catch the group up as theyd already started the garden tour, i was whisked through the main entrance having only seconds to glance round, already wishing i had more time as we walked down a beautiful shaded walk filled with Hosta's, Astrantia's, walls cloaked in Clematis.

Then it opened out into a sun filled expanse, my eyes drawn into a space dazzled with sunlight, golden conifers amongst a picture painted in shades of green. Winding gravel paths tempting you onwards. 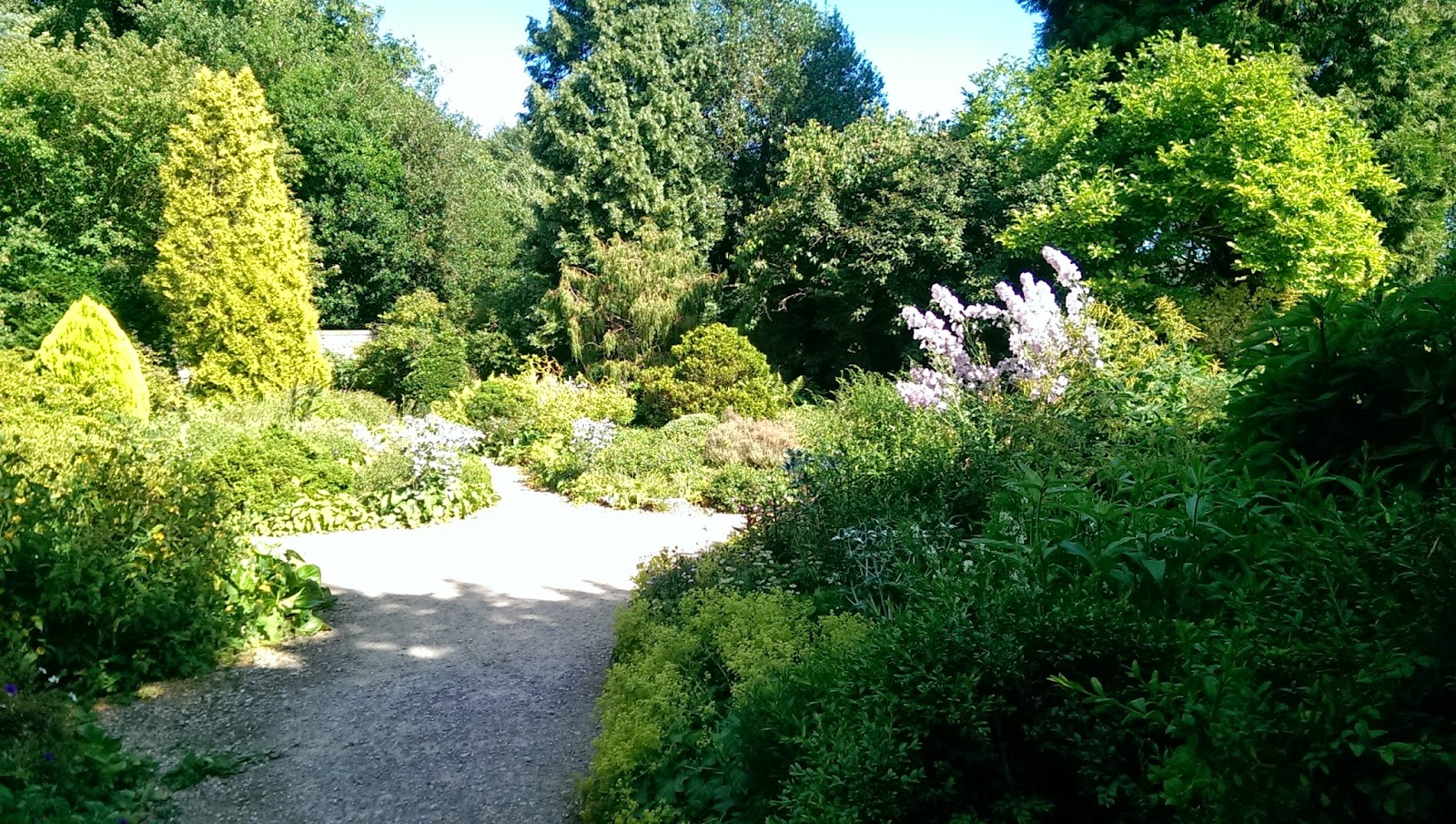 All this was a hurried impression though as we could hear the voice of Rob just around the corner explaining the history of Waterperry's, unique in the horticultural world is an understatement!
Opened in 1932 as a residential horticultural college exclusively for women under Beatrix Havergal it concentrated at first on food production.
Heres a link to a pic of her standing outside the main entrance ("Donkeys" as its known to the gardeners) of Sissinghurst. Two of her students went on to become Head Gardeners here so we have strong links. I think "Pam&Sybil" are pictured with her.

Beatrix was famous also for her Gold medal winning Royal sovereign strawberries at Chelsea.
In 1971 Beatrix retired and with her the college closed heralding a new era for Waterperry's.
Waterperry's now boasts an 8 acre ornamental garden & Nursery producing 20,000 plants a year from their own stock beds, they still run courses onsite, they also have an a fabulous Orchard from which they produce  their own juice and cider (which having tried both i can safely say is amazing!) and bottle for sale.

Back to present day....
We rounded the corner to see Rob and a collection of Head gardeners from various establishments arranged in front of this striking view. A long deep border filled with herbaceous perennials in full flower.


The smell coming from these borders is heavenly, the phlox being one of the main reasons, and the sound of bees droning around the flowers adds to the quiet charm of this garden.
We made our way along to the next area where i saw something that is very familiar to me at Sissinghurst, trained Roses bent over to take out the Apical dominance and encourage flowering. This technique has been used on fruit production for years but ive only ever seen it used in 2 gardens on Roses. Waterperry's and Sissinghurst.
It was great to see the influence of Pam&Sybil's training, it gave a real sense of history and continuity for me. Some of these Roses are the original ones planted by Beatrix in the 1940's and it shows how this technique extends the vigor of the plant.

Next we moved to the island beds, first popularised in the 1960's my earliest memories are of this style of gardening. Often filled with bedding plants on windswept seafronts the term conjoures up a mental groan from me but imagine my surprise as we emerged from a clever screen of trees to see this laid out before us.

Large enough to give the impression of a huge sweeping mass of plants, the beds have almost a secretive quality insofar as the paths are hidden behind the impressive displays of Delphniums, Rudbeckia, Monarda & Achillea. The edges broken up by Crocosmia (or as my mum would always insist on calling them Montbretia) Salvia nemorosa and Knautia macedonica.

My eyes and heart have once again been opened to this much maligned style of gardening and as Rob explained it does have a horticultural theory behind it. Traditionally plants were grown in deep beds with either a wall or hedge as a backdrop. They were viewed from one side and grown tallest to smallest, back to front. The purpose of an island bed was to allow a plant to be viewed from all sides but it also caused the plant to grow in a more compact strong way as the stresses from the elements would come from all sides. Not only would the plants grow shorter, it would need less staking, suffer from less P&D and flower earlier. Genius!

Seen like this, island beds no longer make me groan instead my mind has grown! (sorry couldnt resist!)

Clever plant selection also ensures continuity, as one plant goes over its neighbour comes into flower, combine that with foliage and you have a year round display.
We swept on to another horticultural era from here, one which im sure we are all familiar with and might evince another groaning reaction from many, conifers!
In the late 70's and early 80's there was a huge rise in the popularity of this style of planting, personally i remember huge housing estates rising up, all neatly laid out with grass lawns to the front with a token pocket of coniferous trees set to one side. I dont hate this style of planting but i do think overuse killed its appeal. For those that have no real interest in staking, pruning, dividing and digging i can understand its popularity, year round interest, shape and form provided by junipers, colour by heathers and unusual conifers with little to no maintenance needed but i admit i am glad it had its day.
It still has merit though and used as an element in a garden it should not be underestimated. I see them as the bones of a garden, when winter strips the flesh, this is your structure, your eye is still drawn out and beyond the confines of your window due to these beauties.
We learn something from every era and even if it is for that reason alone they deserve a mention, if not a picture.

A new feature to Waterperry's is the Canal, i say new, its a few years old now and as Rob explained theyve had a few problems getting the Waterlillies to flower due to a high PH in the water. They tried everything to sort it out and typically as these things go, having given up last year and letting the water evaporate away through the long hot summer, it refilled itself over the winter and heres how it looks now.... 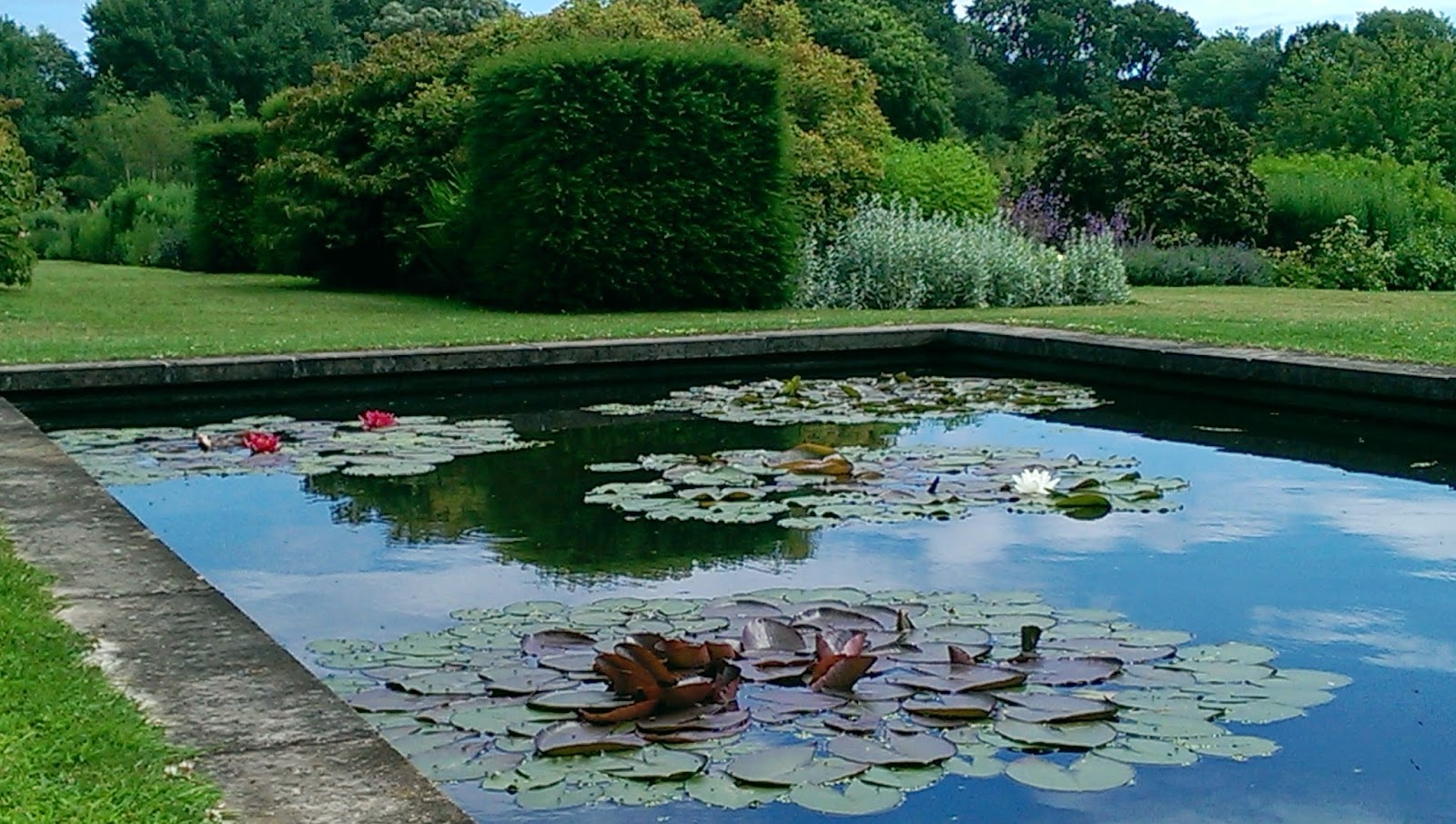 Its hard to try and cut this down to blog size, as Waterperrys has so many good features, but i will try! so a quick scan through the next parts of the garden....
Viewed through a Wisteria walk this garden takes a view on era's gone by and the plants included.
Talking about replanting Roses.....
and a quick look at the Alpine beds....
At this point we stopped for lunch and a chat, we'd also covered the meadows, yew henge and the long colour wheel borders, i snuck back later for more pics of these. It was great being surrounded by so many gardeners enthusiastic about their work, very inspiring!
After lunch we were treated to a talk on the Nursery and propagation they do at Waterperry's. Included within the garden are their stock beds, an unusual and brave move for a public garden, these beds are usually unkempt, hidden treasure troves but here they are an immaculate feature of the gardens. 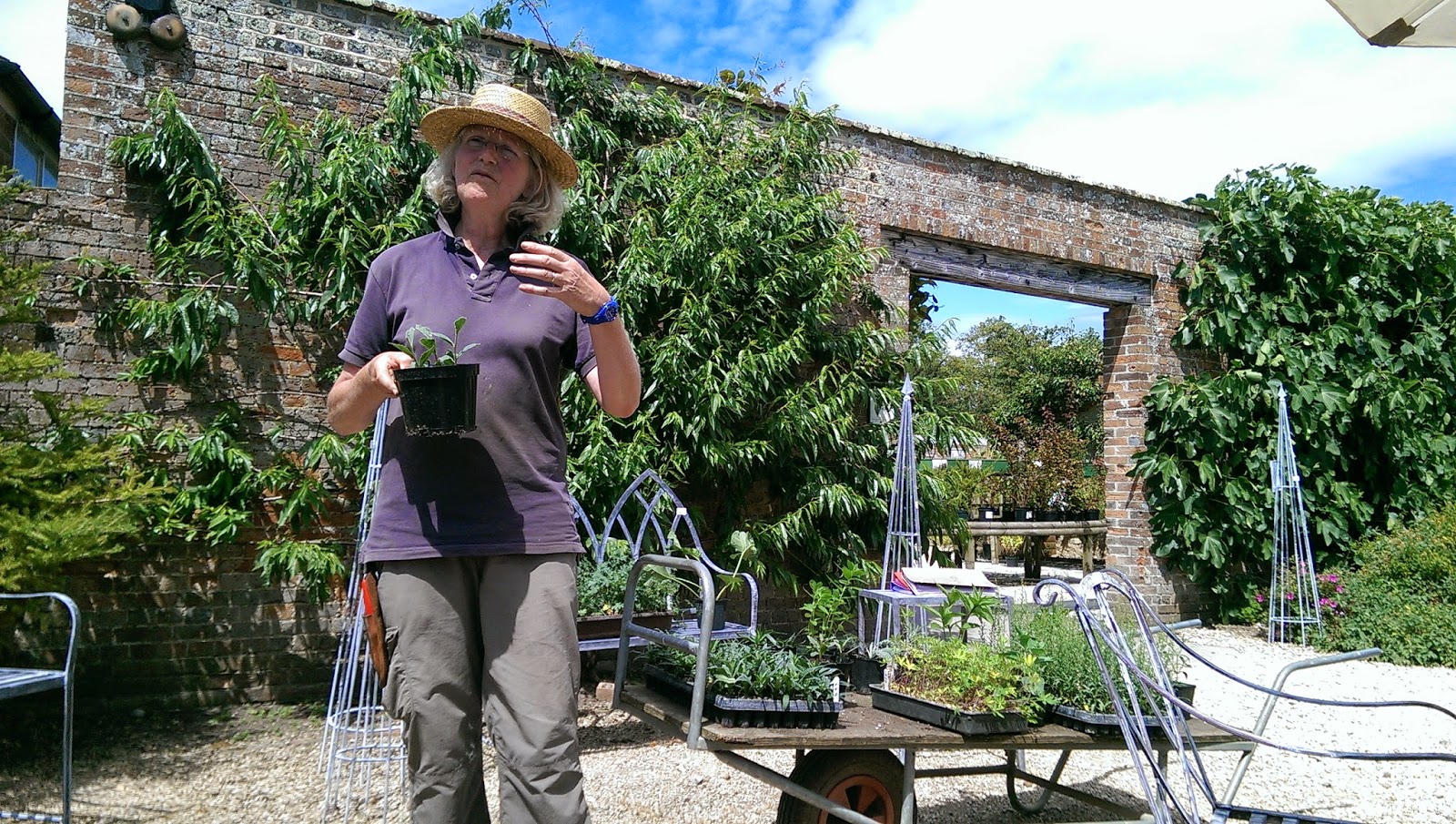 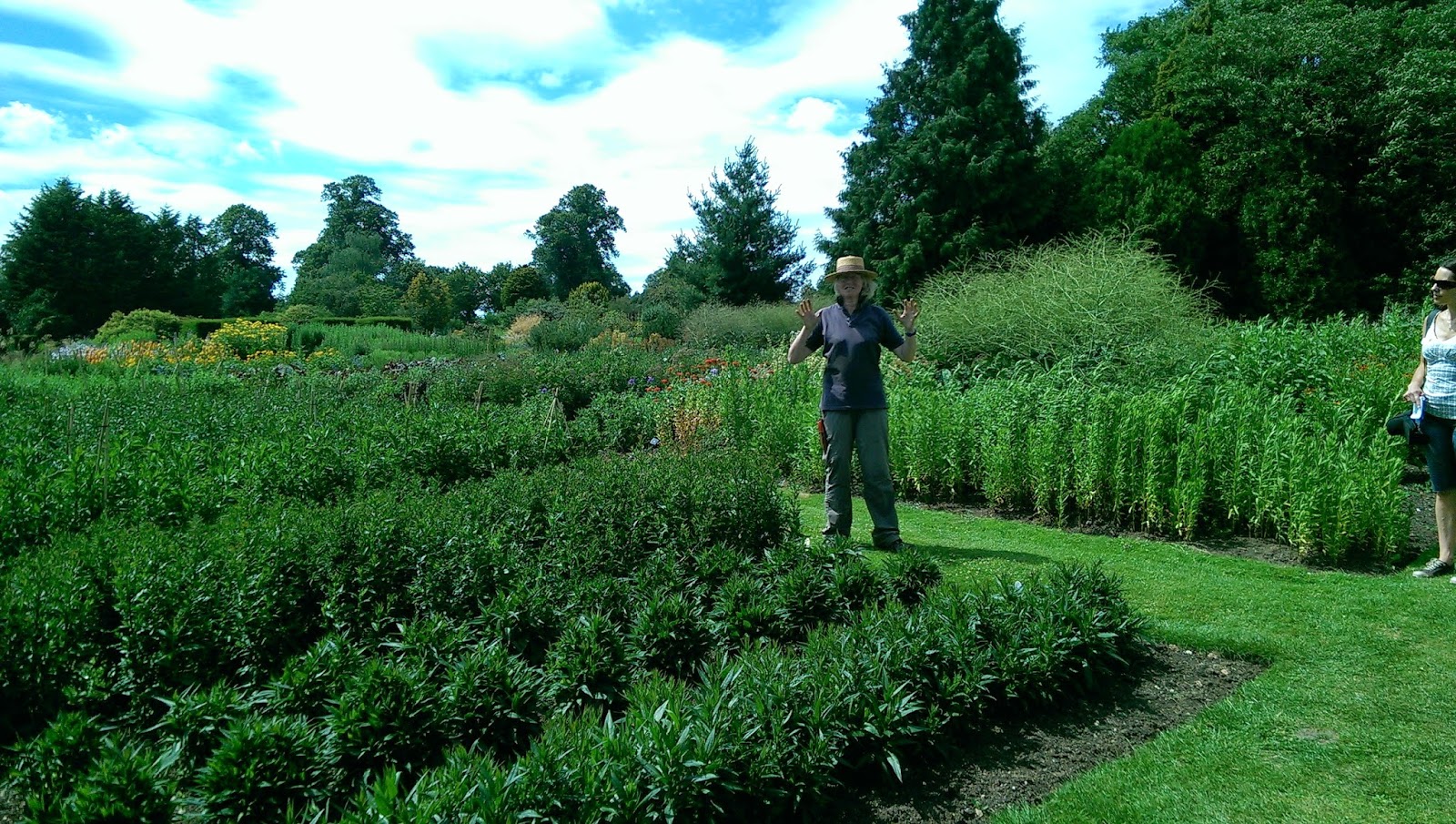 After this we got to look around the Orchards and production sheds they have onsite with Chris Lanzack, a man that really knows his apples! I'll save this for a different blog though, we were all treated to a tasting session and i can confirm that both juice and cider are to die for!

One last gem of info we learnt that day! Have you heard of Miss Willmott's ghost? Yes? Well Miss Ellen Willmott, an eccentric lady at best, used to scatter seeds of Eryngium giganteum in the borders of gardens she visited. She is worthy of an entire blog to herself but i shall just mention Miss Wilmotts Tree. Apparently she turned up at Waterperry's one day with a tree from one of her estates that was being broken up hanging out the side of her car! It was planted in the gardens where today it is an exceedingly fine specimen, i admit i forget what it is, perhaps you could enlighten me!


As everyone said their goodbyes i took the opportunity to sneak back in and take a few more pics!
Without further ado here are a few gems!


Hope youve enjoyed this look at Waterperry's its an inspiring garden, with a great history and fantastic, committed staff!