The start of 2012, for me was a vague blurry one if I'm honest. You see at the end of 2011 i was fighting an illness i didn't even know i had. Feeling cold/flu'ey id been to the doc's as it had continued on and off for a couple of weeks. He said i might have a chest infection and sent me home with anti biotics which i dutifully took and felt much improved but as the new year started i went downhill fast and i ended up in hospital on Tramadol and not really knowing what was going on! 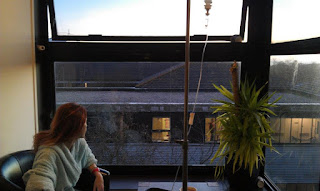 Cut a long and not very relevant story short, i got better but it took months for me to regain my fitness levels. In that time though once again i received a huge amount  of support from the people i worked with. I was allowed to return to light duties very quickly as being stuck at home was driving me mad, given the task of updating plant records which was both informative and quite honestly exciting! Ok i realise that what i consider exciting may sound interminably boring to others but i do enjoy being a geek! Amy, once again was the most awesome friend, taking me to hospital appointments and one time ripping 7 shades out of a doctor impertinent to suggest i had an eating disorder! Ha! Hilarious! He didn't know what hit him! Anyone who knows me even vaguely knows my world revolves around food, coffee and plants!
The start of the year was once again blanketed with snow for us in Kent and by the time i returned everything was a winter wonderland! 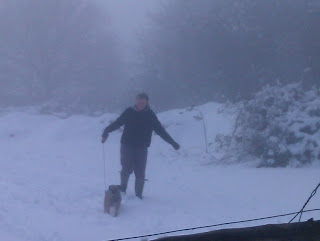 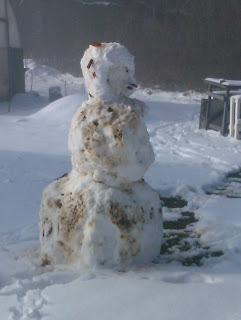 I would make forays out of the office though as i missed being outside with the team, one time we had a moment to play we made a snowman, its the little things eh! What i missed though was the putting in place of stage 3 of "The Cunning  plan!". This was to prove worth its weight in gold as it was a rabbit proof fence, a truly rabbit proof fence, put in place around an acre of the field. 3 Gates, 1 of them pedestrian, the others for the tractors and vehicles. I do remember one of the first truly sunny days of the year slinking out of the office to the field to see the last of it being set in place. What an amazing achievement!
By the time i got fully back into the swing of things though March had started but what a relief and what a change! Not only was the fence up but beds had been redesigned giving a more ornamental look to the visitors area. It made a huge difference. We were also still trialling new (to us) methods of working, a few No Dig beds, and continuing with the successes of the previous year. Straw FTW!

Also the Herb Garden was getting a revamp, down came the rabbit fencing giving a more open look and allowing visitors to see more of the garden on their approach. I had enormous fun creating climbing supports for hops around the new entrance, perennial sweet peas had new archways to clamber over at the entrance and exit from the Herb Garden and teepee's were created for our annual sweet peas on the cut flower beds. 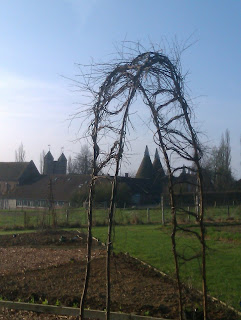 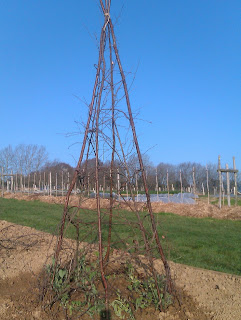 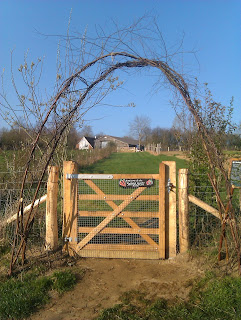 I was also able to be a bit artistic with our new shiny interpretation boards! (although the spelling couldve been checked a bit better, always proof read Lou!) 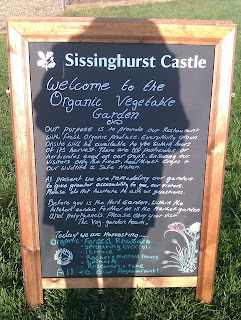 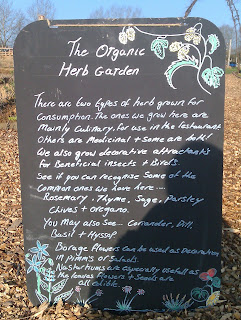 New paths were given a woodchip finish and of course our hens were given a beautiful run. They had made an amazing recovery and were busily getting on with the job of ... well, being hens! 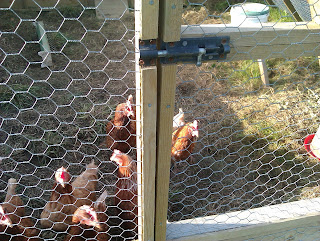 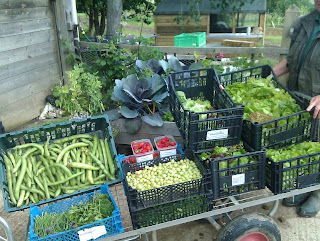 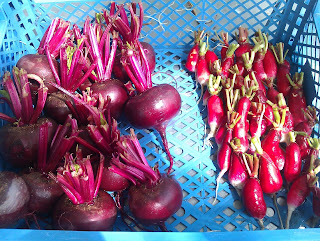 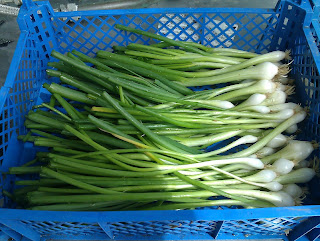 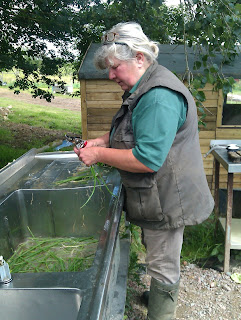 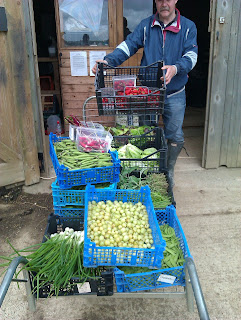 By June we were making daily harvest that were... well.... i think amazing doesn't even cover it! Providing fresh Organic vegetables to the restaurant, shop and now tho the farmers market. If it seems like I'm incredibly proud of what we achieved its because i am, it was such an uphill struggle for us all to get to this stage and suddenly it was all coming together. 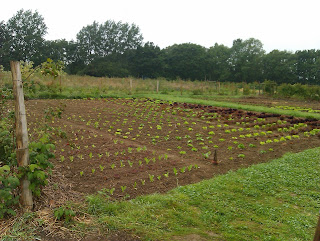 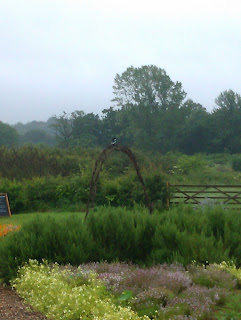 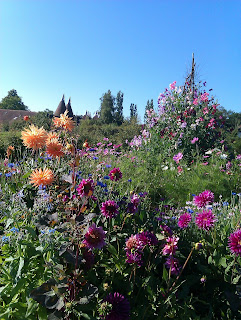 This was the year of the Olympics and I'm honestly not sure how it affected our visitor numbers but it did seem to me that we were having less overall to the property than in previous years, the hype the TV series created finally dying down maybe? The veg garden though was becoming a popular place to linger with its picnic benches placed alongside the Herb Garden, our beds planted with lettuce were becoming a real talking point.
Before we knew it Smallholders was on us once again. 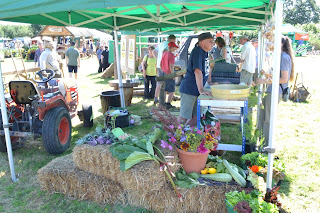 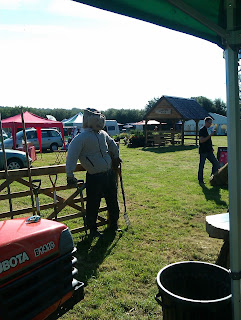 I was very happy in my work, i had no idea that someone was getting itchy feet but shouldve guessed maybe that Amy always planning had another idea for the future.... 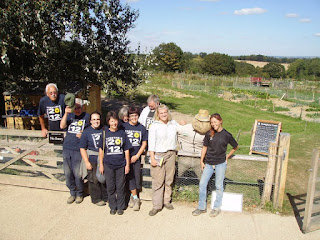 In an enormously brave move she had decided to spread her wings and start up her own garden maintenance business, I'll be honest i was gutted. I could see for her sake it was a great move but selfishly i was losing my partner in crime. No more would we play "Final Destination" tightening the spades under a ton and a half of machinery. For those of a H&S disposition, ignore that. No more would we yell across the field at each other "have you got any string?" or say "gerroff my laaaand" and laugh. No more lunchtime picnics under the shade of the Lime trees, no more would she put up with my whinging about my private life or give me advice, wise beyond her years. On her last day, we all went to a local pub to say goodbye and never one for public displays of emotion, i gave her a hug, wished her the best and walked away.... sobbing like a baby.

So, Ok! This changed EVERYTHING.
To say i wanted to be the one to fill Amys position would've been a massive understatement. This field had become my home, id watched and helped it grow, it had taken my blood, sweat and tears, literally. I loved the volunteers, they were my friends. I knew the direction that she and i had planned to take the veg garden in and believed passionately in it. I honestly don't know how i would've felt if someone else was to step in? I could almost see me staying here till i retired!
I was given the position of "acting senior" (this title amused me greatly) and until interviews i was to take charge. These were big shoes to fill and i knew that! Scary.... very scary!

One thing that was going to change, which was something we'd trialed was the no dig beds. They'd worked enormously well & my senior management was totally for it.... Perhaps even a bit too gung (or should i say dung?) ho! but I'll come to that. Matt if you're reading this you know I'm saying this in a lighthearted way as what we did worked!
We started in the polytunnels, oh my god did we start, i cant remember exact figure of what went in there but i think it was nigh on a couple of tons of manure per tunnel. My abiding memory of this time is seeing my manager Matt Jackson standing knee deep in the middle of a tunnel with a hay fork in his hands looking slightly lost, overwhelmed and exhausted. Bless him he worked so hard on them. 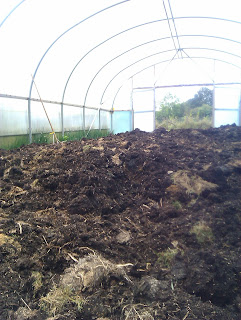 The soil which was exhausted after 3 years of constant cropping was about to receive far more than was bargained for. Beds were established that could be reached from both sides without treading on them and the planting was to begin after a few weeks for it to settle in.
Then we moved on to the veg garden proper. Converting our smaller bed system established at the beginning of the year into further divisions with paths in between.
Below is a pic of our experimental No Dig beds, with paths topped with wood chip. This was something id been introduced to whilst working at Ryton and it suited our soil amazingly. 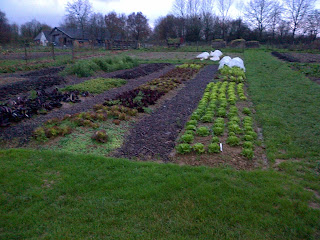 So we forged ahead .... The volunteers put in an enormous amount or work, clearing weeding and preparing 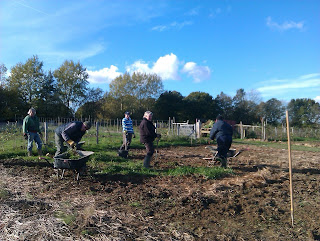 And this was the result, even now looking at these wonderfully straight neat beds, paths finished with a layer of cardboard then woodchip i get a thrill. 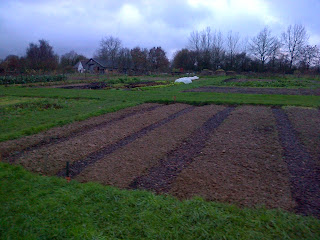 Then for the manure, we all "mucked" in taking everything our farmer could provide, our own compost and buying in council green waste. Anything we could lay our hands on. creating a 2 - 3" deep mulch ready for planting when conditions allowed. 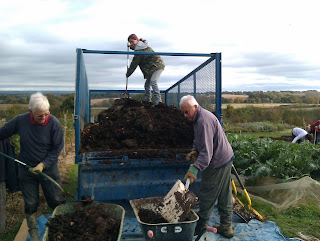 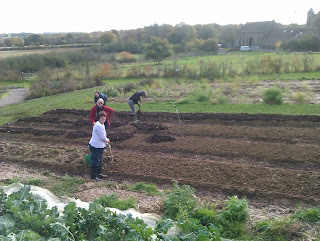 It was a huge undertaking and honestly looking back i still cant believe we did it but we did.
The polytunnels got planted with winter salads too..... 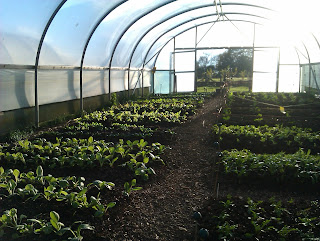 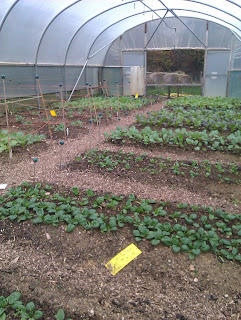 Then as we moved towards xmas, Onion and Garlic sets arrived. Onions (esp. Red) have a tendency to bolt if exposed to cold temps but id been given certain challenges to live up to by our chefs who loved our onions so in the spirit of "yes we can!" i devised my own hopefully cunning plan and popped them into seed trays then placed them in to the polytunnels to hopefully give them a head start. The garlic would get planted out as close to the shortest day as possible as cold weather causes the bulbs to break into separate cloves.

Then finally December loomed and my interview date... Gulp! In my heart i knew i could do a good job but i think if you don't doubt yourself a little in these situations there's something wrong. I'm confident but not cocky. I look around the plot and see what we've achieved in just a few short months, I've got plans in place for the next 12 months but yeah I'm nervous. Our seasonals are leaving soon and I'm finding this hard as once they've gone I'll be entirely alone a lot of the time. Our hardcore vol's will be here though i reassure myself.

How 2013 would pan out and whether i would get my job only time would tell.
To be continued....