Eythrope House, a rare glimpse of the private gardens of the Rothschild family 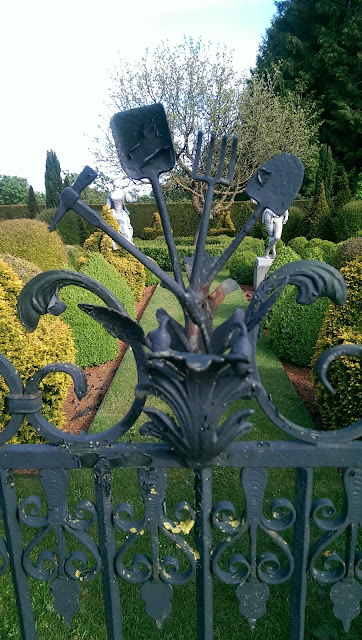 On a beautiful sunny day in May 2015 i was lucky enough to get a rare and exciting chance to view the private gardens at Waddeston, Buckinghamshire of the Rothschild family's home, Eythrope House.
Set in beautiful parkland's, the house has been in the family since the 1870's and has a fascinating history. 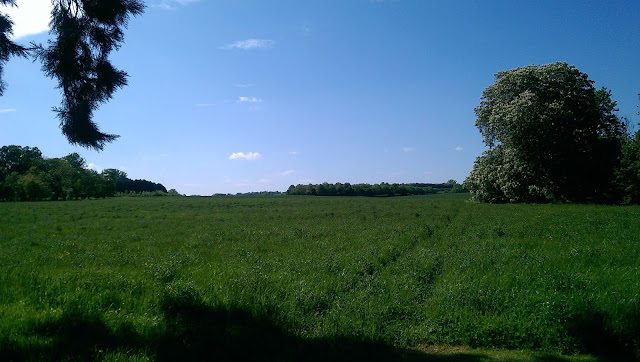 Eythrope village itself no longer exists, wiped out by the Black death, all that remains of it are a few grassy banks and earthworks on the east side of the park. One day I'll return to investigate these further but on this day time was limited and i didn't want to waste a moment of this chance to see behind the scenes.
The manor house, in various forms has existed from the 1300's but from what i can gather the original building although enlarged and embellished in subsequent centuries was finally demolished around 1810 by Philip Stanhope, 5th Earl of Chesterfield
The land was then bought (1875) by Alice de Rothschild, who's brother owned Waddeston Manor, for the purpose of building a house for herself. In a twist of fate whilst the house was in the planning stage she was struck down by Rheumatic fever, and advised by doctors to avoid damp sleeping conditions, and it was eventually built without bedrooms. Built on the site of the original Manor house beside the river Thame, it was instead used to house her extensive collections and entertain guests. 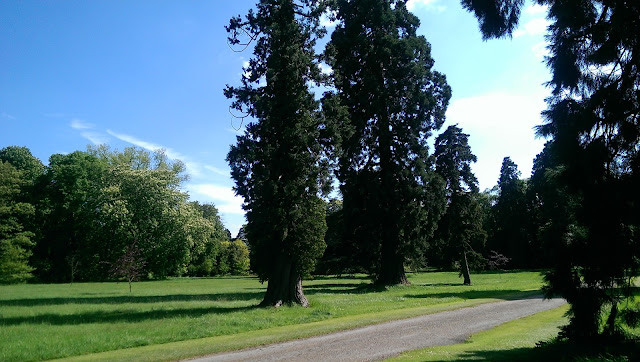 It became known as the "water Pavilion" Alice developed 30 hectares of the surrounding grounds into very modern Ornamental gardens & a large Kitchen garden, which is the area i was lucky enough to view.
So theres a brief history, so a quick review of its modern history. 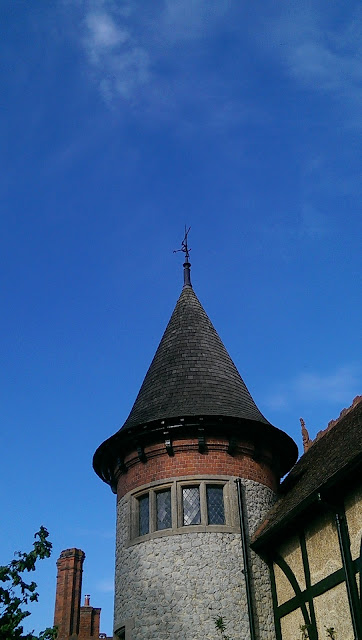 The house and gardens are still privately owned by the Rothschild family, although the neighbouring Waddeston Manor were given over to the National Trust in the 1950's. The present owner is Jacob Rothschild, 4th Baron Rothschild who arranged for the redesign of the beautiful walled garden by the Designer Mary Keen in the 1990's
Mary, who i was honoured to meet on my visit, is a writer for the Telegraph and has written several books, is a formidable figure. She made me feel very welcome though despite having  a limited amount of available time and has an amazing amount of knowledge and enthusiasm for her subject.
She regularly opens her own private garden too, so if you get a chance and want to see her work there is a great place to start.

Ok history lesson over! On to the garden....

After a short chat with Mary Keen and the NT's general manager i was allowed to roam the walled garden entirely alone and as the late afternoon sun spilled across the courtyard i approached the entrance gate with excitement. Aware that the houses left and right were private and not wishing to disturb the residents in this quiet and idyllic setting i was greeted by a small and enthusiastic terrier who i took a moment to fuss. Then given my final permission by the guard dog i looked up into the archway that frames the garden entrance, beautiful! 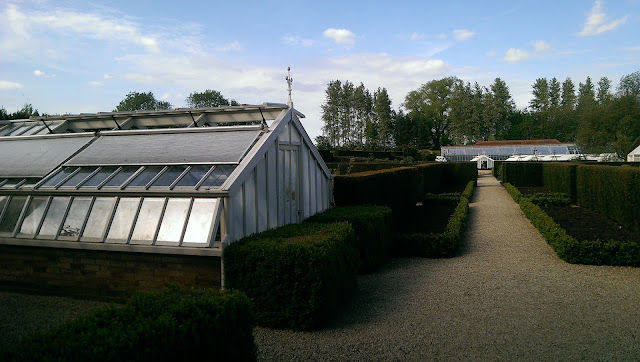 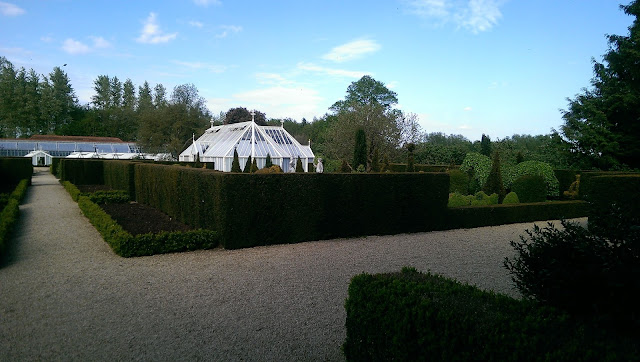 Stretched out before me was a long gravelled walk with large Victorian style Glasshouses in the distance. To the immediate left were coldframes, Glasshouse and a nursery area. On the immediate right an amazing topiary garden, with tightly clipped conifers, box, lonicera & ivy in fantastical forms of crowns, bulls (or horses?) birds and more shapes and forms than i think Ive ever seen in one place! This was all framed by tightly clipped yew hedges leading the eye up the main walk and inviting further exploration. 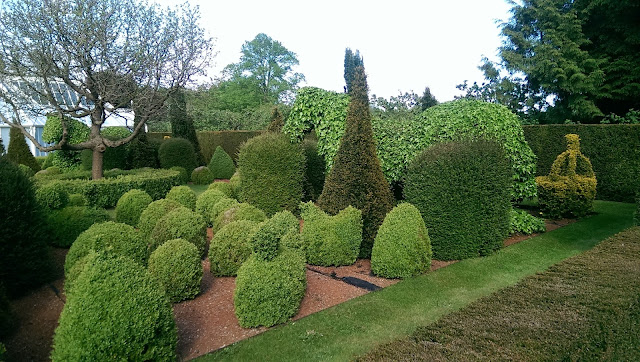 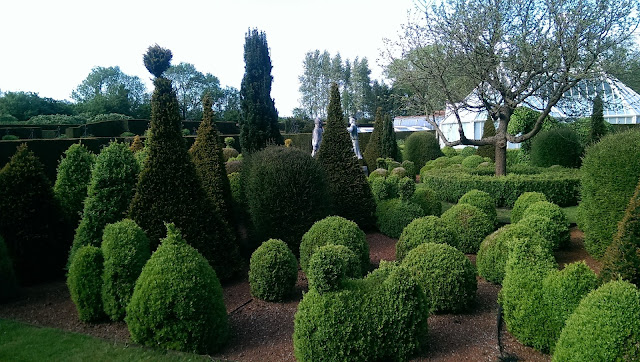 So i began walking further in, deciding to "try" and navigate as logically as possible as there were many tempting branches from the main walk, i chose to concentrate on the right hand side first. Which led me to yet another glasshouse, this one full to the brim with Citrus trees. 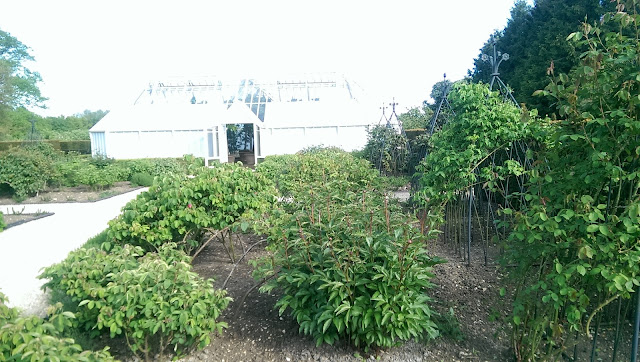 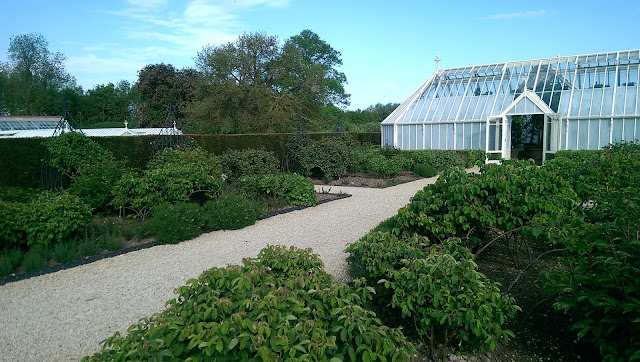 The beautifully manicured beds before it set out with peonies and roses, trained around obelisks in the way I'd seen at both Sissinghurst and Waterperry's. This made perfect sense as i knew the Head Gardener, Sue Dickinson, had received her training at Waterperry's. As had Pam & Sybil, former Head Gardeners at Sissinghurst. I adore seeing this continuity in gardening and the style which lends itself to stark winter forms is also an incredibly good way to make the most of your roses flowering capabilities.
I was less than 200 yards into this fantastic garden and already i was bowled over by the standards being set, this was quite possibly one of the best cared for gardens id ever had the honour of walking round. In some ways this should have been no surprise given the names associated but to see it for myself was such a pleasure and gave me so much inspiration.

So on into the Orangery i proceeded, to be greeted by the beautiful slightly acidic scent of the Citrus trees, some housed in giant terracotta pots as standards, others planted into borders that lined the Glasshouse and fan trained making best use of the available space. I had seen this done by other designers but never on such a scale. An interesting addition to the potted Citrus which Ive never seen anywhere else was a rim of what appeared to be a daub type substance? I presume it was a bifold addition insofar as made from animal manure it would act as a slow release fertiliser and created a secure wall so when watering it would contain the water and direct it into the rootball, preventing it from spilling over the side. I don't know this for sure though and any comments, suggestions on this are welcome. 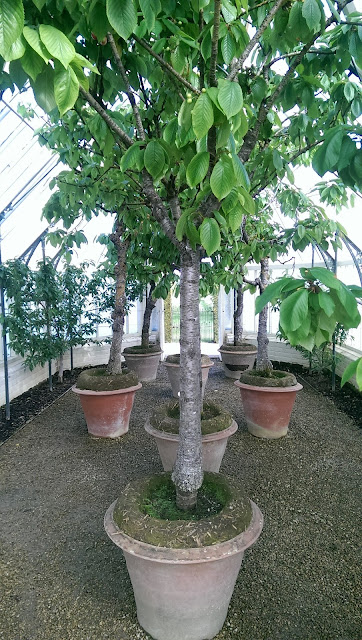 Exiting the Orangery at the far end i am reminded this is a working garden in the most traditional sense with huge stock beds of flowers ready to flower providing a constant supply of Cut Flowers for the house. Exquisitely labelled and set out in straight rows, again the ground so well looked after not a single weed in sight. The beds are set alongside vast Glasshouses which are surrounded themselves by smaller beds, incredibly colourful even this early in the season. 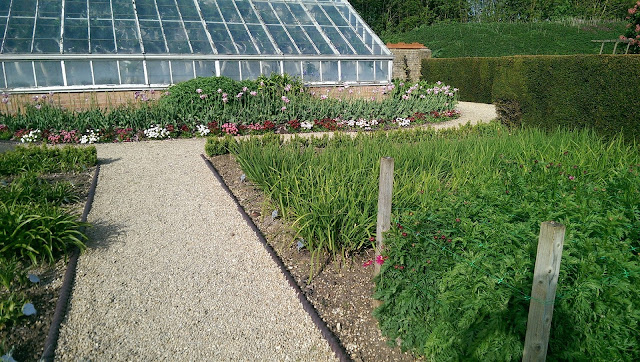 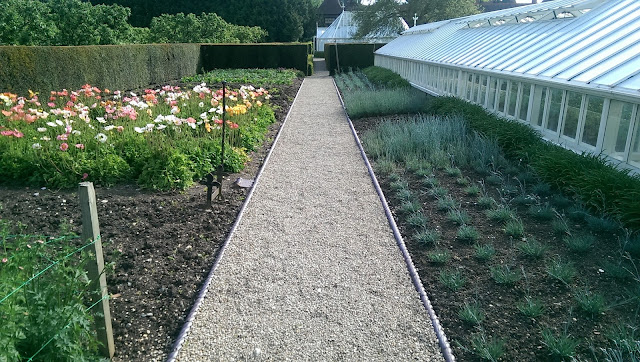 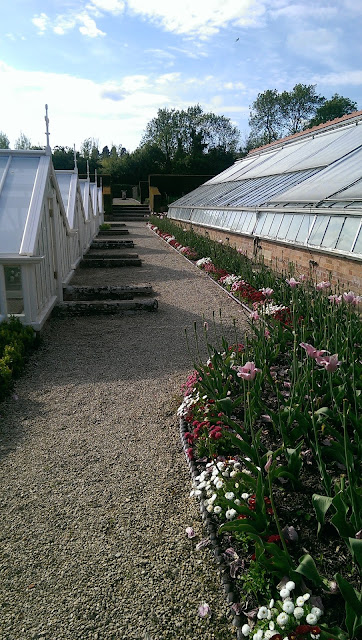 I make no apologies for waxing lyrical about this garden, both functional and beautiful, i genuinely believe that this is the best example of a working Kitchen garden I've ever seen and on such a vast scale. Having worked in walled gardens myself, that at the time i thought were ... well awesome, i found myself comparing them to this amazing place and finding them suddenly lacking.
The massive Glasshouses id seen from the entrance were now before me, i wasn't to be disappointed. Again the standards were, well, immaculate! Incredibly healthy plants, not a single dead leaf or stray morsel of soil. Benches packed with potted plants, ready i assumed for either display in the house or planting out in the Ornamental beds dotted around the garden. This was a horticulturists heaven! 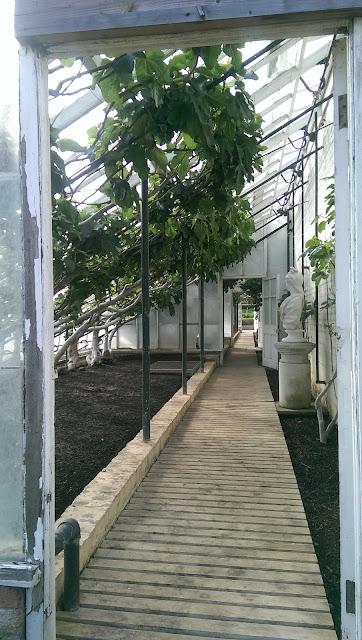 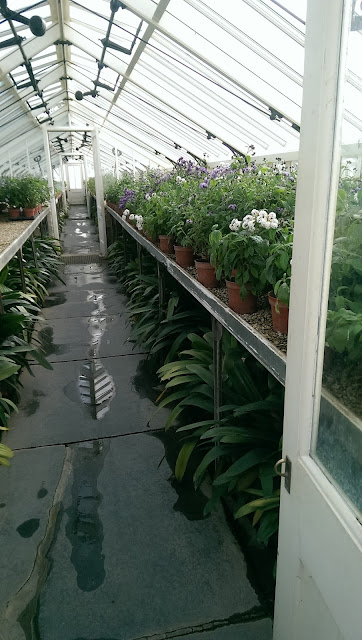 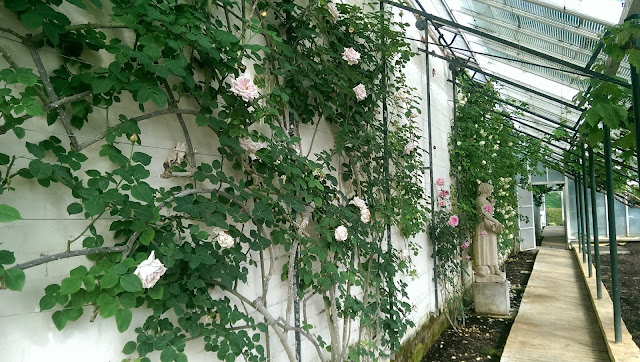 This was no time to linger and sigh in longing though, the sun was sinking lower and i was aware i was very privileged to be here and had no wish to outstay my welcome. So onwards i trotted on this whistlestop tour.
The next sight that greeted me though did stop me in my tracks. More vast stock beds set around a large semi circle and at the rear of the walled glasshouse a large area of fruit trees.
I was so lucky to come when the delicate lavender flowers of the Iris's were just breaking out, i adore Iris's, they hold so many happy memories of my mum for me and as i stood admiring them i thought of her and how she would have loved to see this. 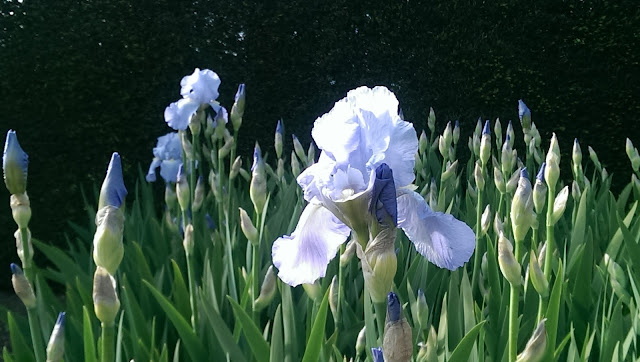 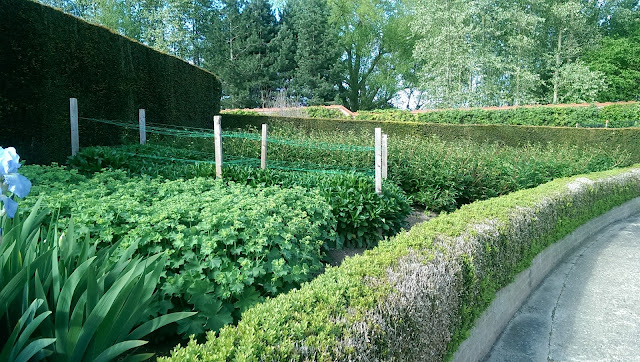 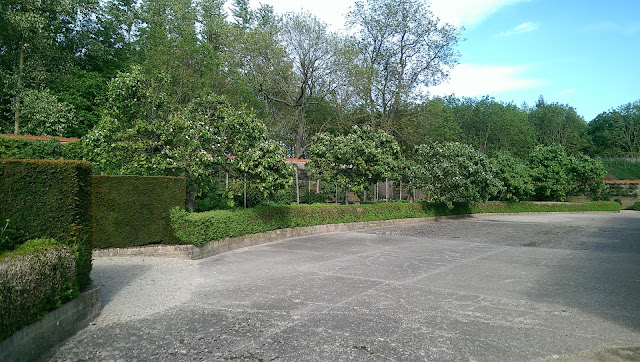 But no time to stand and stare! I've covered less than half the garden!
I set off, to be greeted by the next garden room dominated by a huge climbing rose trained across a beautiful structure which to my mind was reminiscent of a Victorian birdcage, ornate and beautiful. 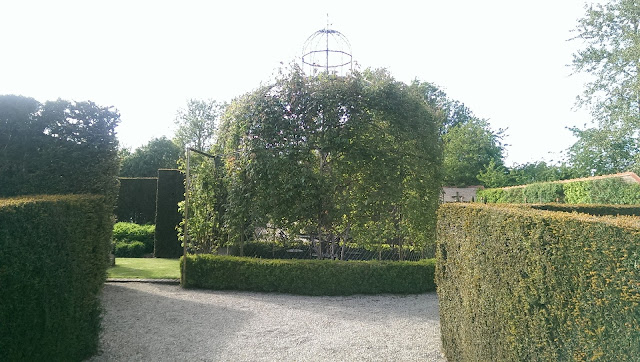 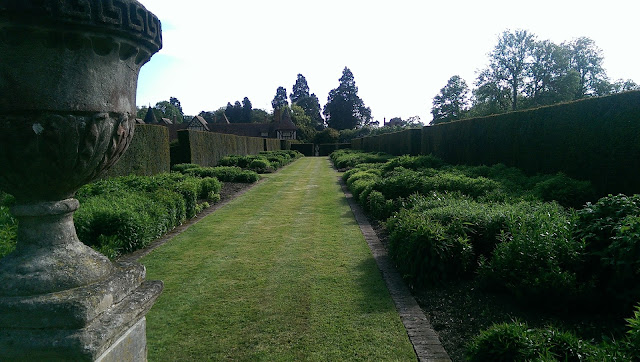 Incredible, manicured long walks leading away on one side, on the other hidden by high yew hedges, the vegetable beds with a beautiful seat around a tree, which honestly i don't know its name. 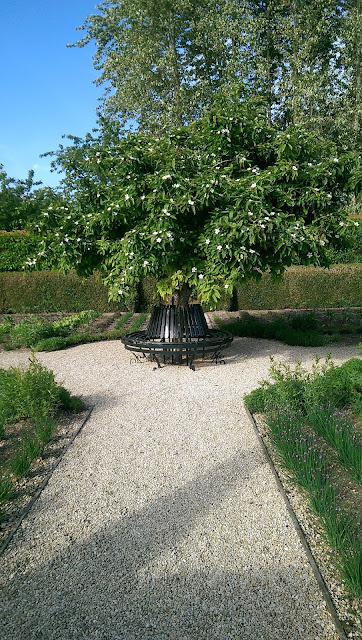 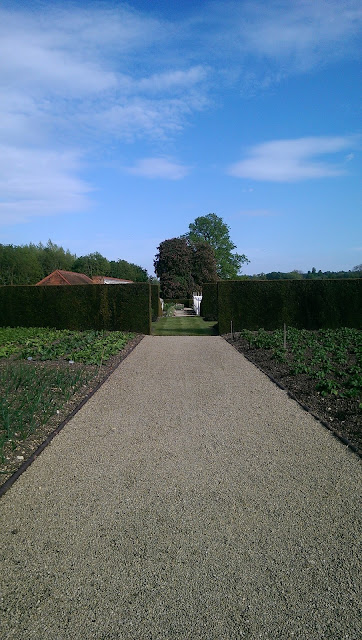 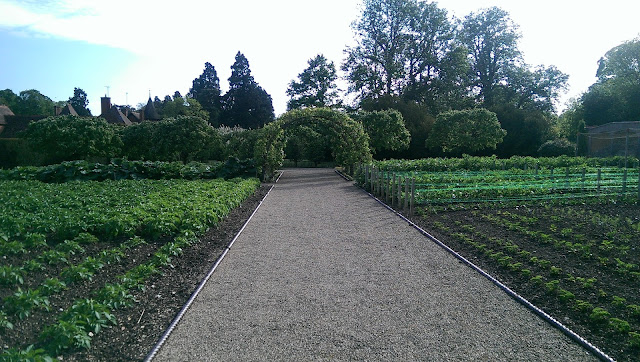 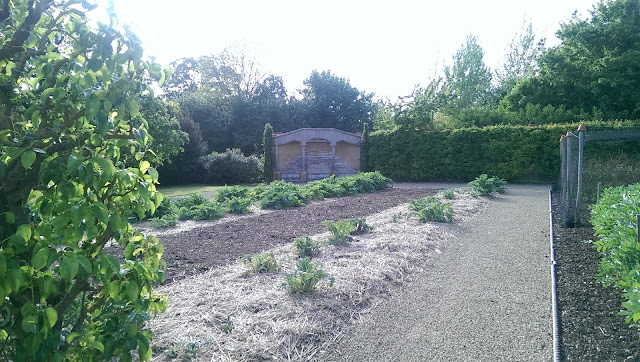 As i exited the vegetable garden i walked through an archway of beautifully trained fruit trees, in some ways overwhelmed by what id seen, in others inspired. I would have loved to linger longer to have been able to ask a myriad of questions on the varieties grown, the maintenance and upkeep of such a beautiful garden, the inspirations behind the design. Maybe one day in the future i will get the chance, for that moment though i was content to just stand for a moment. Hearing the birds singing, feeling the warm breeze and counting myself very lucky to have had the chance to see it. To call it quixotic would be not quite right as although it is an idealistic and romantic vision of a garden its very functionality defies that description. I'll be honest, its rare that a Designer seems to be able to combine the skills of being a plantswoman with the consideration for how a garden will be used both by the staff who maintain it and the joy that a private family can derive from it but here it has been achieved. Much credit to all the Gardeners who work here also, presenting a wonderfully manicured, fruitful delight. Again, i make no apologies for gushing! This garden deserves it. 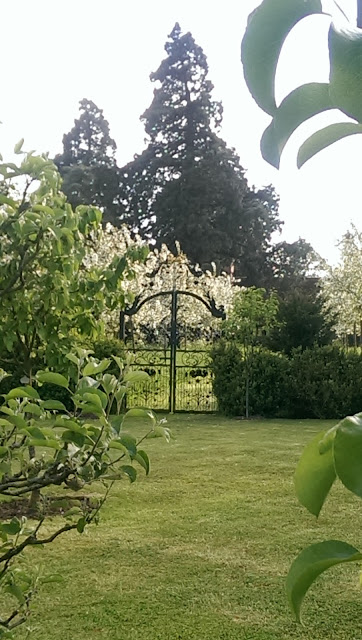 A book is available on Eythrope, with beautiful illustrations and practical information The very private eden of eythrope
More of Mary Keen's writing for the Telegraph can be found here The Telegraph
and for information about open days of her own garden visit National gardens scheme