This week i had the joy of transferring all my old pics from my very old dodgy hard drive, which had taken to constantly telling me it was corrupted, giving me the horrors that over 10 years of photographs would be lost. I stopped using it until i could acquire a new one in the hopes i wouldn't exacerbate any potential damage and last Sunday i spent the day transferring everything over to my new improved shiny 1TB hard drive. Ok, so its half full already but it appears I've saved all of those pictures which document my work and memories of visits etc. so that's a HUGE sigh of relief!
It also means i can now get on with blogging about some of the topics i have in mind!

I woke up this morning thinking of Sissinghurst and the veg garden there which was a time of great joy, hard work and also in some respects great sorrow to me personally. I joined the team there in the spring of 2010 at a time that id taken not only a huge blow to my confidence but on a personal level was dealing with some very traumatic times regarding family and an 18 year relationship which was on incredibly rocky ground. I found there a loving caring environment where my knowledge was not only respected but valued and more importantly to me personally a team that supported me, a stranger in a strange land!
I'll never forget the interview, it was terrifying as i had 3 people sat in front of me, including one of the most respected Head Gardeners in the trade, Alexis Datta. My potential new boss, who id seen on TV, Amy Wardman & Tom who was running the farm project as it was known at the time. About half way through, and i cant remember what exactly it was that was said, lets assume it was something slightly irreverent as it was me talking, i caught Amy's eye and she had the hugest grin on her face and i remember thinking "I could really get on with her" I was right.

So i joined the team in their second full year, thankfully after the TV crews had left and the real business of growing and making the garden could start. A 5 acre field, previously a cow field for 40 years, fabulously sunny aspect, heavy clay soil. In winter it was like dairylee, you could cut it into bricks, literally! In summer, concrete, my small self could pogo on fork and not even dent the surface but incredibly fertile! 2 Large polytunnels, a tiny greenhouse and a newly planted 3 acre orchard which the locals had quickly dismissed as a folly due to its exposed position. Fair comment in some ways but .... well... ill get to that.

Rabbit fencing around the tunnels was essential as I'm pretty sure the whole site was the setting for General Woundworts warren. Even despite this we would regularly suffer damage to the crops inside. Although by 2014 we had achieved complete security.


The Orchards huge fence post like supports for the trees seemed overkill but as Amy was Wisleys fruit student she had her reasons and it proved essential for the espalier training on this windy site. Pictured here it was hard to imagine how in time it would progress to the hugely productive orchard it is now. It became for me a great place to escape to, relaxing, peaceful, full of the drone of bees in the spring and summer, beautiful.

In that first year life was full of ups and downs, the veg plot had a lot to live up to as it was attached to Sissinghursts reputation, the TV show had created a lot of hype around it, a relatively new team learning how each other worked, each others skills and the fabulous enthusiastic volunteer team who without it just wouldn't have been possible!
For myself, id moved miles away from friends and family, my mum had gone into remission, although that was to change and sadly by the August of that year we lost her. Everything was new and ill be honest slightly scary. Anywhere else i might have felt isolated but not with these guys, i truly lucked out when i joined them and now 6 years on I'm happy to say I've made some lifelong friends within that group, anyway, i digress! 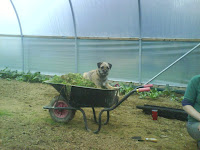 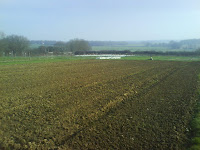 Margey moo riding in wheelbarrows was commonplace as was my eternal cup of coffee, The polytunnels pictured cleared of their winter crops were daunting to say the least as was the newly spaded fields which were waiting to be planted up. This was vegetable gardening on a huge scale, no dainty walled gardens, this was practically farming!


We spaded the fields to prepare them for planting as opposed to the more conventional method of ploughing because we wanted to avoid the pan created by that method, given our soil it was the best choice. 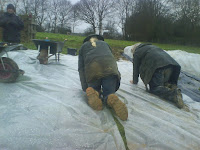 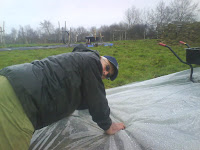 Laying down Mypex for the strawberry plants on this windy site also proved to be hilarious, It took a team of us to ensure it was laid tight and secure it and at times was like a sketch from the chuckle brothers.

By June/July of 2010 id totally fallen in love with Kent, Sissinghurst and the people i worked with, a rare & beautiful thing. The plot was romping away at a speed that was staggering, weeds and crops shooting up! I'm those first years the fight we had to keep the plot presentable and productive was mammoth and at times seemed impossible but with Amy's constant optimism and good cheer, fuelled on part by vast quantities of tea & cake, my caffeine induced hyperactivity and the hard work of our seasonal crew and volunteers the shape of the veg plot began to form.


The excitement we all felt at the developments were huge, a new Herb Garden was being instated at the bottom of the plot.

A constant battle against rabbits was fought, with Marge (the gaffer) patrolling the borders and living up to her breed name.


And me? well i could often be found in those early months in my beautiful tractor driving in incredibly straight lines, Pendulum, AC/DC or Linkin park blasting on the stereo with coffee by my side. Preparing yet another field for planting!
Good times indeed!

So many fun moments! 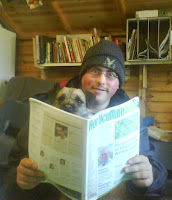 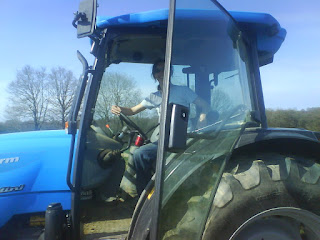 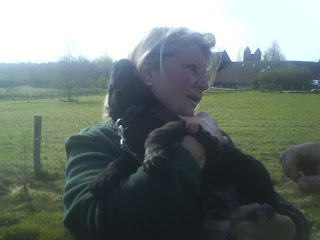 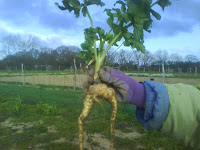 And so much hard work! Looking back that first year was so difficult. I kept a piece of advice id heard years previously in the forefront of my mind as we struggled to keep up with the weeds. "It takes 5 years to establish a garden"  We all knew we didn't have 5 years to prove ourselves, we had this year, maybe the next if we were lucky to turn peoples opinions round. Online there were some incredibly harsh critics writing blogs about us. We had comment cards coming in that expressed negative views and in fairness we could all understand their viewpoints as the plot was weedy, untidy etc. but we were producing beautiful Organic food for our onsite restaurant and selling the excess. Amys amazing cheerfulness and constant optimism buffered the team from the worst of the criticism levelled at us but we were aware of the views. 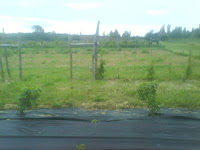 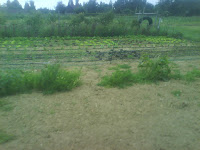 This was how things looked by July that year, we were all aware of it and to some extent we were aware that maybe we had bitten off more than we could chew. 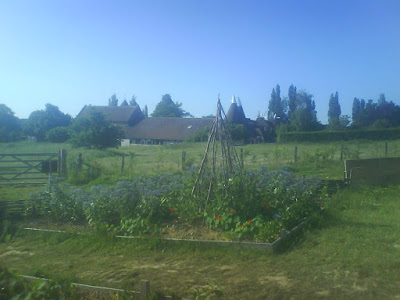 The Herb Garden newly planted with Borage, Nastutiums, Cosmos, Calendula & Dahlias was coming into its own. The more traditional herbs we had included for providing the kitchens were already outproducing the requirements and Cut flowers from the ornamentals were a huge success.
In August of 2010 we geared up for the very first Smallholders fair.

At this point my personal life became very difficult, i know you're always told not to let your personal life interfere with your work life but hey it happens and from my view the way your workmates and the business you're in react is a measure of its empathy and its value. I will be eternally grateful for the support i received during this time. My mum, who's battle with Ovarian Cancer had been ongoing since 2008, was losing her fight. I had spent most weekends that year driving to Durham and back trying to support my family, trying to take some of the burden, it was hard but as i had people around me that cared it was bearable.
But as it came to the weekend of the Smallholders we all knew i was waiting for that phone call, it came at about 11.30 that morning. Long story short, for the second time that month i raced up there. Mum was enormously brave and strong and we lost her the following weekend but because of the support i received from work i was able to spend that last precious week with her.
Totally devastated, totally lost, my best friend was gone, without the people at Sissinghurst i will never know how i would've got through it.

So life went on and i threw myself back into work! and as the season came to a close we had an awesome party for the volunteers, the weather was good to us and as we sat relaxing hot air balloons drifted across the wide open fields laid out before us, we had completed a summer. We had given tours, had the joys of introducing schoolchildren to wildlife and good food, had hilarious days and hard ones. Produced food that was a complete success and we were in a positive mood as we drifted into the winter which was going to prove to be an unusual one in recent standards as we had snow!


As 2010 drifted into 2011 the whole country shivered under a blanket of snow, our team bereft of the seasonals was reduced to all but the most hardy of volunteers, Amy and myself. We spent our time productively and anyone who thinks that winter is a period where nothing is done in a garden would be sorely mistaken. The planting of Garlic, sowing early seeds and of course harvesting our lovely winter salads from the polytunnels all continued. As did the harvesting of late Carrots and digging up of Parsnips, the memory of washing them off in freezing cold water will never leave me. My hands would be screaming from the cold and i wouldn't be able to move my fingers by the end for fear of them snapping off! 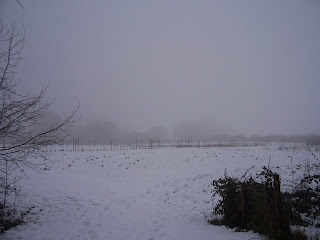 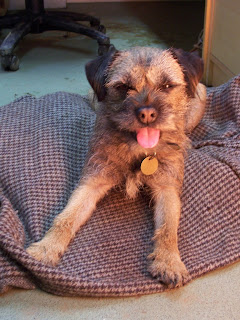 Of course there are always some who enjoy the cold weather and Marge took full advantage and gave her best impression of a "Hot Dog" i think I've ever seen!
To be continued....