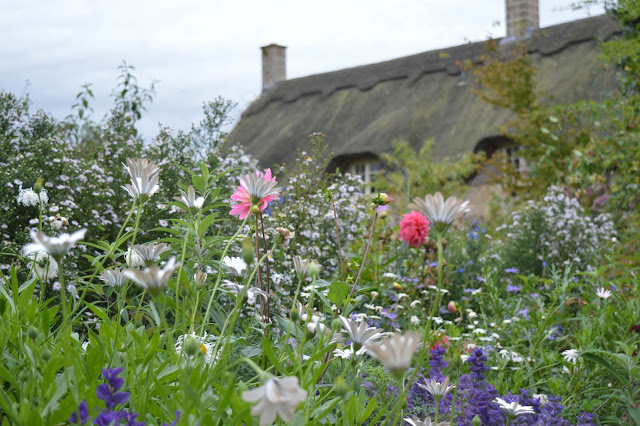 Mid September, a time when the garden is starting to wind down and the garden visits for the year are slowing. I couldn't resist saying yes to the All Horts gathering at Hidcote though. It's a garden I've loved for many years. The last time I visited was shortly before I left Garden Organic and moved south, at that time we were lucky enough to go on a staff visit and get a tour from the, then Head Gardener Glyn Jones. Glyn has now left to make a mark on the historic gardens at the Shakespeare Birthplace Trust, Stratford-Upon-Avon.

My last visit was roughly 10 years ago, give or take, Hidcote had been a regular on my list of local gardens, one that I had taken Mum & Dad to visit. Sadly I don't think I have any pictures from back then but in my head the gardens were always sun baked and peaceful, my favourite border was always the famous red border, so even though I set out early in the morning in rainy gloom I was feeling optimistic for the forecast.

Lawrence Johnston was the originator of Hidcote, starting in 1907, his mother bought the manor house and he set about turning the surrounding fields into what is now an iconic garden in the Arts & Crafts style. The theme of the "Garden room" is not as new as the glossy magazines would have you believe, Plantsmen of the early 1900's had already started this trend of areas enclosed and themed with exits and entrances leading to wonderful vistas over surrounding countryside. 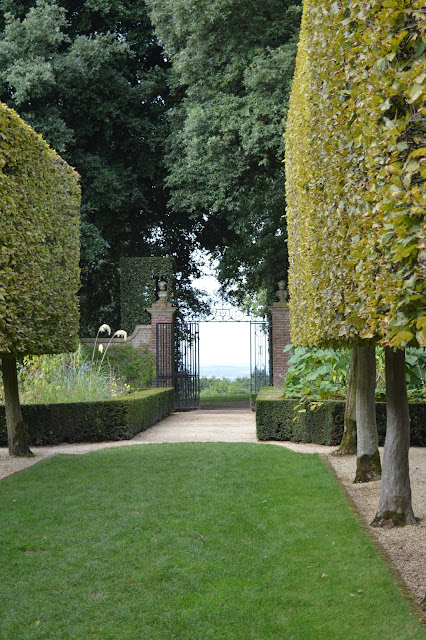 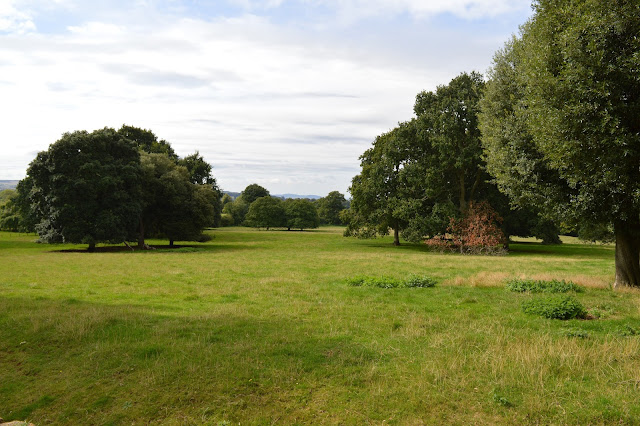 His influencers, such as Gertrude Jeykell & Alfred Parsons are now bywords for excellence in design. His peers and contemporaries were people such as Norah Lindsay & Vita Sackville West, known for her creation of Sissinghurst. Lawrence Johnston was a quiet man by all accounts far more at home creating his gardens than the life of a 1920's socialite, maybe that's why Hidcotes name is the one people remember rather than his? In the world of botany though this man was a giant! One of the unsung heroes of plant hunting, he went on plant hunting expeditions to Europe, Asia, Africa, China and South America. Each time bringing home a small gem for his gardens. He was also a great sponsor for other people, making it possible for Frank Kingdon Ward to travel in Burma, one of the people responsible for introducing countless Rhododendron species. W. T. Goethe & Edward Augustus Bowles travelled with him. Highly influential in every way, this quiet man bequeathed Hidcote to the National Trust in 1948 when he retired to his garden in France Serre de la Madone.

Back to present day!
Bearing in mind several points...
I haven't seen the garden in around 10 years
I never saw it this late in the season

The approach to the gardens has changed massively from what I remember, there is now a lovely new build (?) cafe and plant sales area. The signage around this area is pretty good I noticed as I rushed to try and catch up with the others. The entrance completely threw me out! Same gateway but now you enter through the entrance of the house itself, which is quite nice. I say this is a new thing but in reality I don't actually remember exactly how it used to be? I think it was through what is now a gift shop, anyway! 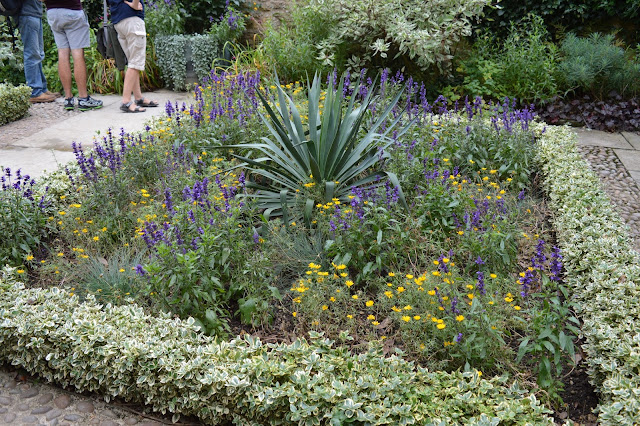 The first sight as you enter the garden is of a cute little parterre with an excellent choice as an alternative to box hedging, Euonymus fortunei 'Emerald Gaiety' planted up with summer bedding of Salvias and what I think are Bidens (I could be wrong on this, I was in a hurry) Rocky and I were almost an hour late, traffic, so we scurried to catch the end of the tour being kindly led by Sarah Davis the Assistant Head Gardener. Flying past the enormous Cedar of Lebanon I remembered the last tour I had been on before being surrounded by a fantastic scent of cherry pie! An entire bed of Heliotrope that even on this overcast day was able to envelope you with its mouth watering scent. I caught sight of our group, in the distance, and tried to negotiate the straightest path to them. This as it turned out included naughtily leaping some of the Trusts iron hurdles to gain access to the sacred Red Border where our group of intrepid gardeners were being treated to a private viewing! Quick introductions were made to those members I hadn't met before, hugs for those I had, a few pictures and then on to the plant house. 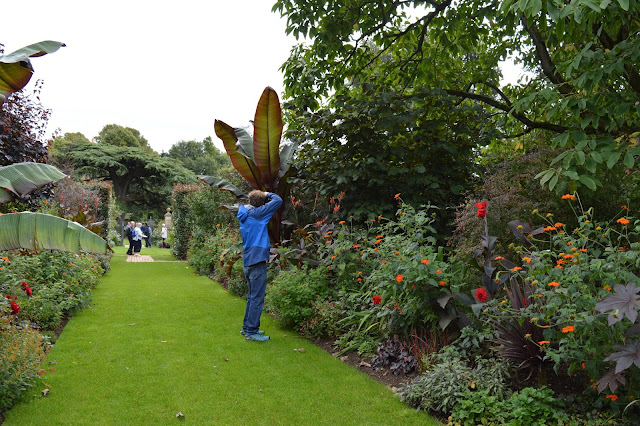 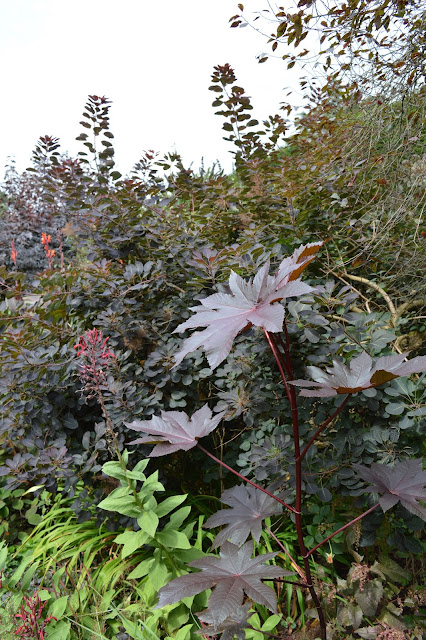 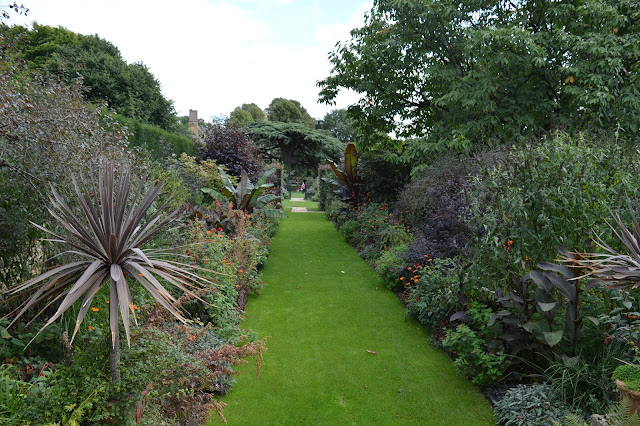 Talking mainly about the history and much needed restoration of the relatively recent addition (restoration?) of the wooden conservatory called the plant house. Sarah explained how only 10 or so years old it is already needing a lot of work to its wooden supports to keep it in good repair and the decision on how to fund this work is very much in the forefront of everyone's minds. Its such an important aspect to the garden not only in its history but also as a place to house and show some really gorgeous plants in their collection. 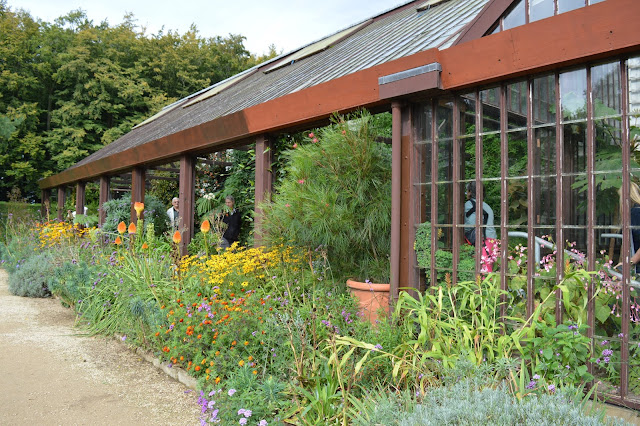 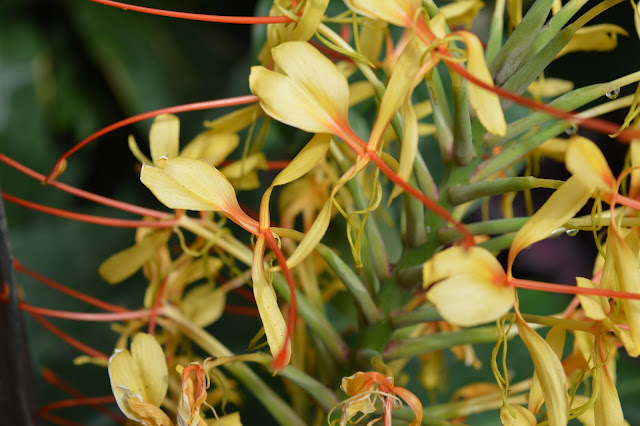 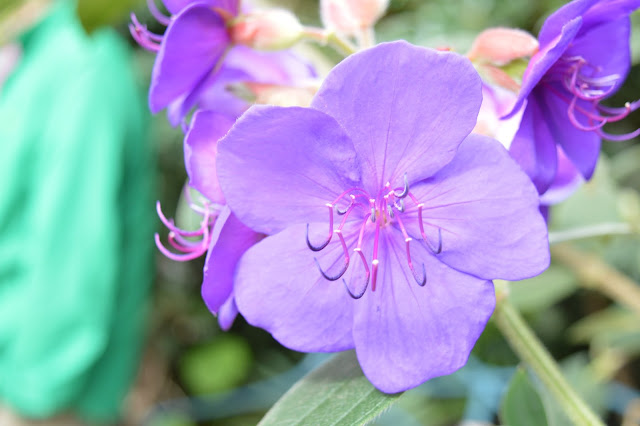 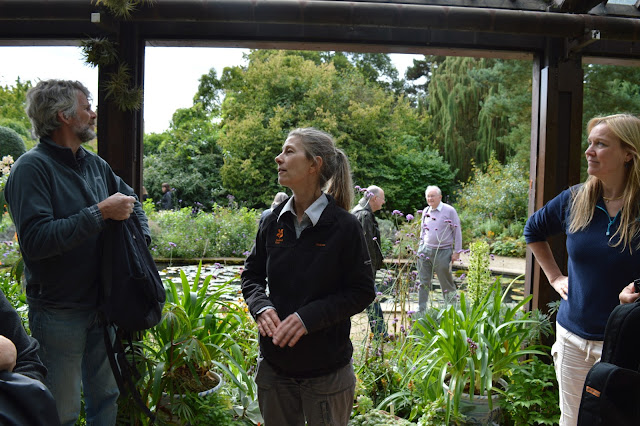 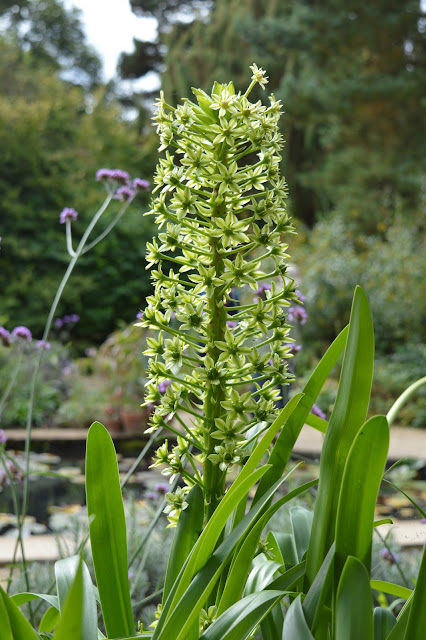 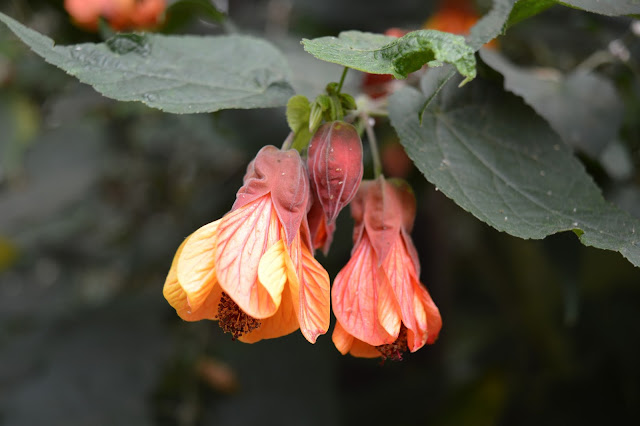 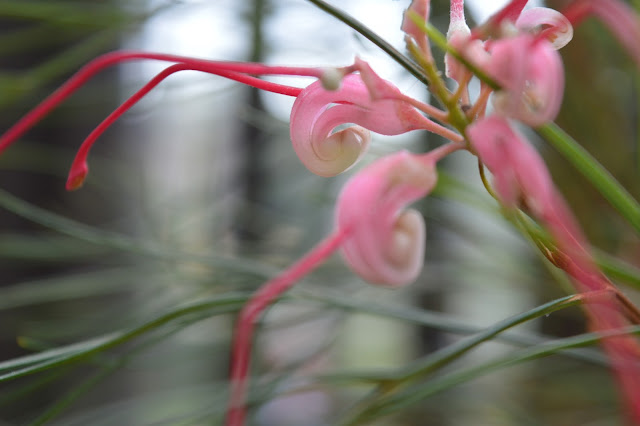 From there we moved to the long borders, an area I'm sure had only been recently planted up when I last visited, I wish I had managed to arrive on time. I could've asked more questions! They were just at the point of going from summer splendour into autumnal tumble. Still verdant with jewels of Asters shining through, just a hint of winter structure from the seed heads and exclamation points provided by the carefully manicured hedges. 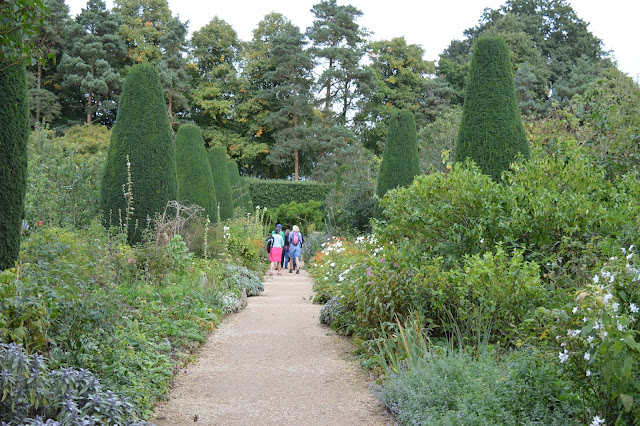 We moved through to the Kitchen Gardens which had changed beyond all recognition for me, my last visit this area wasn't open to the public. It was an area like most gardens have, a graveyard of old pots, scruffy plants and dead machinery. Now fully in use as a Kitchen garden with a late crop of runner beans handily planted to the side of the path a quick taste test ensued.... they were lovely!

At this point our lovely guide took her leave and we headed for the cafe. I wont bore you with the details of what I ate but it was lots and it was lovely. We chatted and caught up with one another then headed over to Kiftsgate, this is where it gets funny... 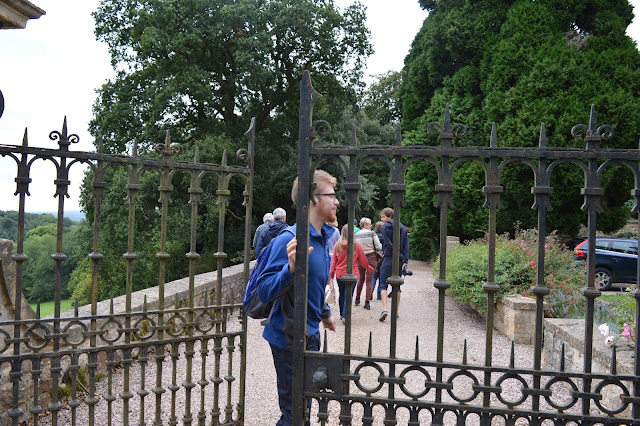 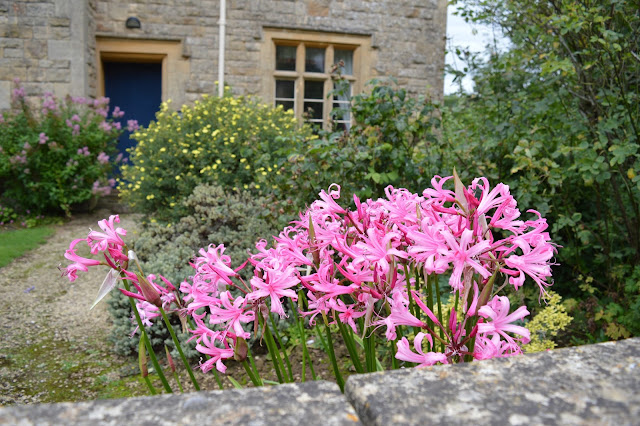 We posed for our usual "All Horts" picture, as ever ably taken by Gerald, by the gates. We even looked at the signs with opening times and admission prices before ambling through the gates and up the long driveway. We perused the plant sales area and enthused over the Salvias when a deep baying ensued.

Somehow each and every one of us had failed to notice the massive signs at the entrance saying CLOSED ...oops! 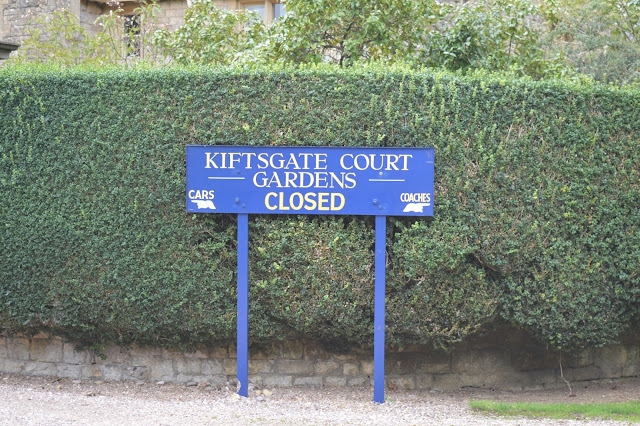 So having failed in our mission we beat a hasty retreat back to the cafe at Hidcote to renew ourselves, chat a bit more, then myself and a few intrepid others went back to revisit areas of the garden we had missed on our whistle stop tour. 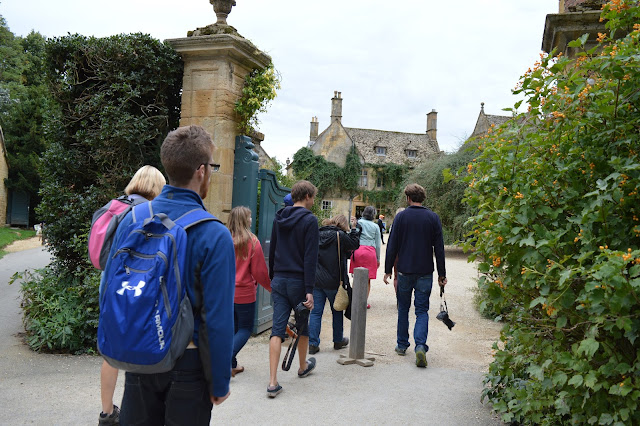 On reflection, the elements that make Hidcote, Hidcote are all there, no matter the season. The thought that was put into its vistas, the quiet areas, even the wonderful paving that changes throughout the garden to reflect the theme. Hidcote is undergoing some major renovations, replanting, but the ethos that Lawrence Johnston built the garden to is evident at every turn.

"Plant only the best forms of any plant" 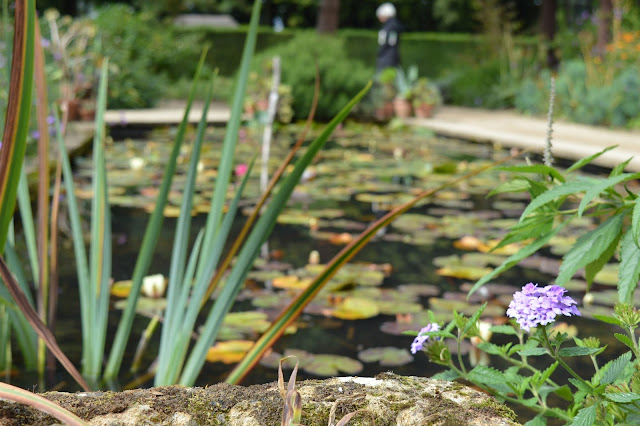 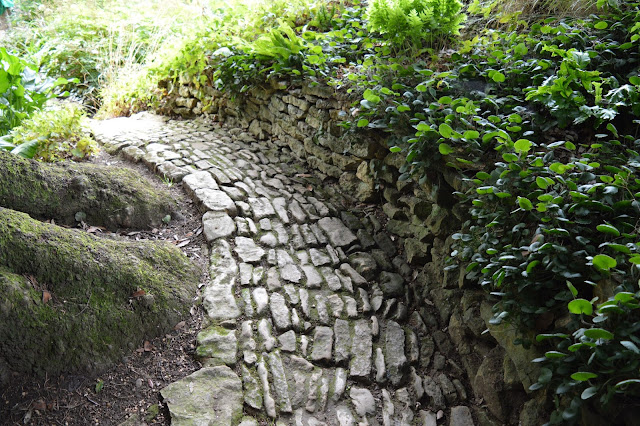 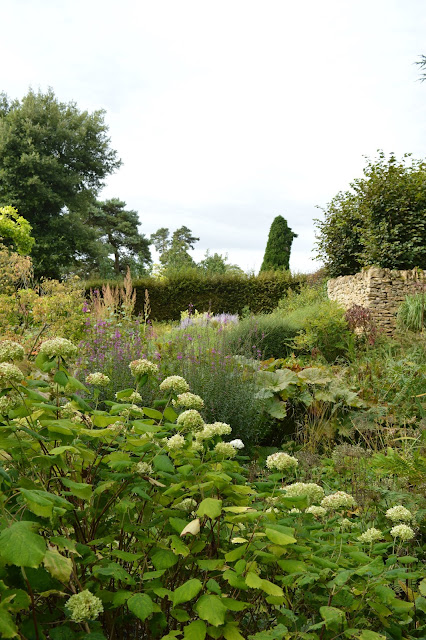 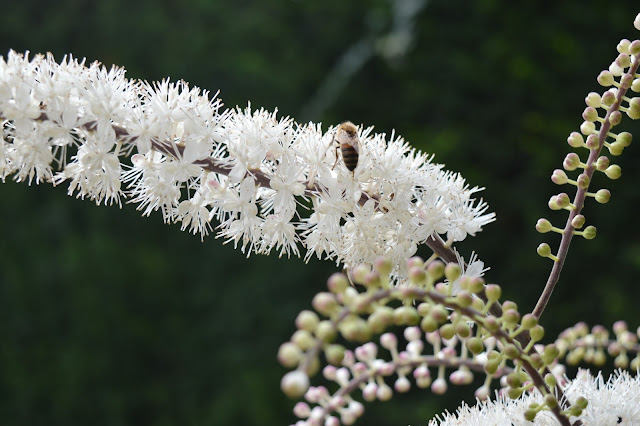 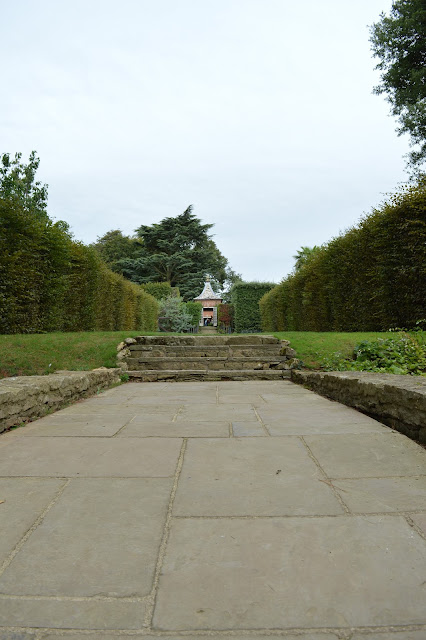 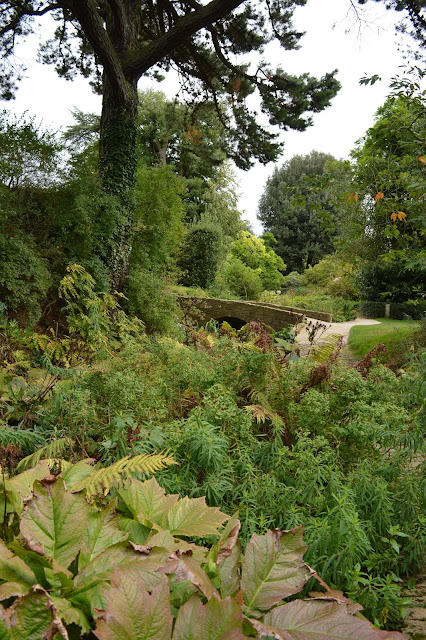 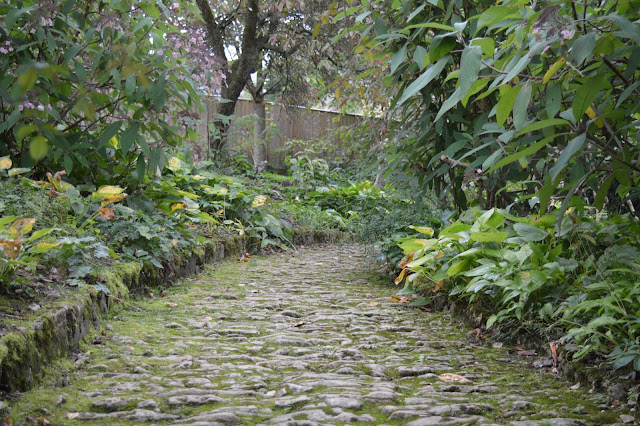 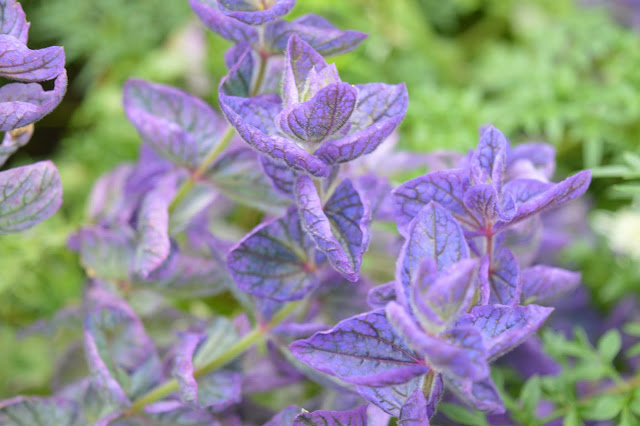 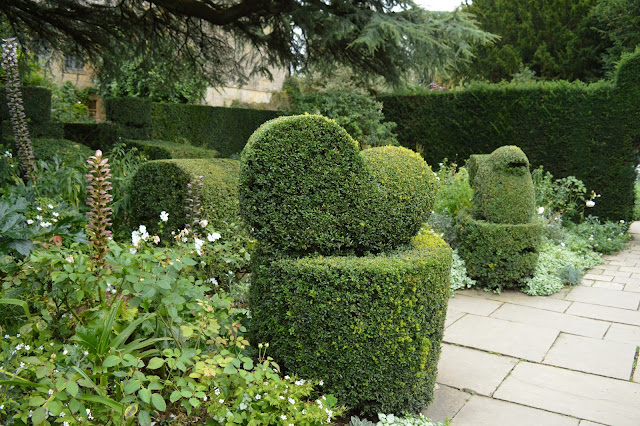