In my last blog i enthused in a rather emotional way over my love of auriculas and by the time i finished i realised that if i tried to be a bit more factual about it at the end it would become a huge blog with far too much information to be digested in one sitting.
I'm going to try to set out here what i understand of their history and of the requirements of a 'Show' auricula, i admit i am not an expert on this and Ive had to teach myself as i go, so please if you are more knowledgeable look kindly on me, i welcome correction on any points i may have misunderstood (*whispers* if no one says anything we'll just assume i got it right, eh!) So here's the more factual look at breeding and showing these fab little plants, starting with....

Where do they come from!
Primula auriculas are found in the wild but not as we know them in this sense. Like other members of the Primula family, such as cowslips, they have been crossed and bred to the stage they are at now. Above is the wild form found growing in the mountain ranges of central Europe, including the western Alps, Jura mountains, the Vosges, the Black Forest and the Tatra Mountains.
As is the way recently, it has been further re-classified into Primula lutea (once a synonym for auricula) and P. auricula but this is not the time to go into plant taxonomy in great detail.
The auricula as we know it today has a history dating back over 400 years, i'll just give that a moment to sink in.....400 years!
It's a cross between P. aurcula and P. hirsuta (hirsuta meaning hairy) commonly known as the 'stinking primrose' (poor thing!) and can be found growing wild in the Alps and Pyrenees.
Purpley pink in colour with a white eye and hairy leaves.
John Gerard (c. 1545–1612), the man who gave his name to 'Gerards Herbal' or Generall Historie of Plantes (First published in 1597 and still available today as a revised, cut down version, hilarious at times to read due to its description of how Barnacle Geese were thought to be created/born) knew of these hybrids. A complete character in his own right Gerald was a bit of a bounder and scallywag, furnishing his life with somewhat exaggerated claims but his notoriety is quite handy as his Herbal is an accurate record enabling early identifications of plants to be dated to a time period.
So, throughout the 16th, 17th,18th & 19th centuries the Show or Alpine auricula gained notoriety and fame, first within the courts of Europe, where plants and gardens were always seen as a status symbol. Then they trickled down to the lower Lords and Ladies and finally to the hoi palloi. They kept a level of popularity that most plants ever fail to achieve, most rising like Icarus to a blazing peak then falling and crashing like Tulips. Mix metaphors much?
Sadly, as with a lot of garden related knowledge and material, the two world wars diminished the genetic stock available to today's gardeners, some varieties being lost forever! The 'stripes' and 'doubles' already falling in popularity being hit hardest, heartbreaking!

Societies began to form to show and compete in the mid 1800's and their history alone is fascinating, full of intrigue and competitive zeal, it was because of enthusiasts like this that the auricula did survive though and in 1986 one of the groups of enthusiasts held the first show in pretty much living memory, it was a huge success and suddenly a revival began.

'Potted' history lesson over, so what can you expect from the modern auricula?


Types - When it comes to shows auriculas are divided into classes. Below i outline and hopefully describe in easy to understand terms what each class means exactly.

Show and Alpine auriculas - "individual flowers or pips should be flat and thrum eyed, with the outlines of the zones of the flower (tube, eye and pip) circular, well defined and in proportion. "


So what does that mean exactly? If your not familiar with the terms used it can be terrifying! Lets start with 'pip' simply put its the flower face, when it says it should be flat it means when viewed from the side the petals should neither reflex forwards or backwards and the stamens and anthers should not sit forwards and be visible.

'thrum eyed' this refers to the plants Anthers. There are 2 descriptions which are relevant here, pin eyed - where the stamen (looks like a pin head) is clearly visible above the anthers and thrum eyed - where the stamen is not in sight above the anthers at all. A show auricula must be Thrum eyed as pip eyed is seen as a fault and will disqualify it

Show auriculas - The eye of the flower is referred to as "The paste" and must be "must be pure white, dense and unblemished" 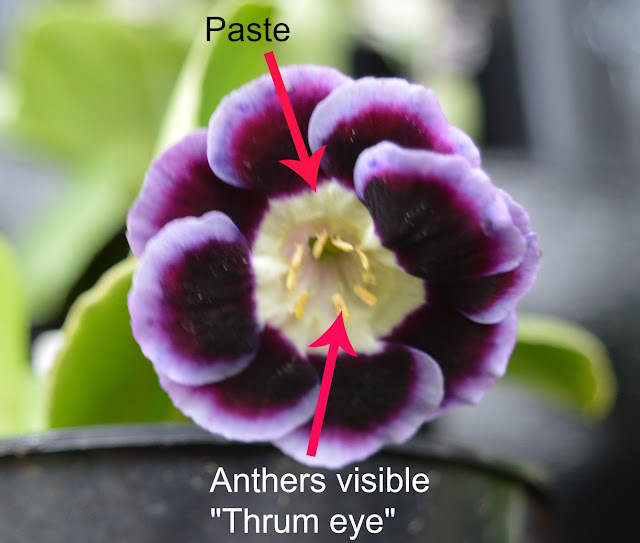 The waxy substance that causes this dusting of porcelain white look is called "farina", incidentally this is a base word used in other Latin names such as Salvia farinacea, a lovely little bedding Salvia that has what appears to be a dusting of white powder on the bracts of the flower. See! Latin naming IS important! *soapbox moment*
A contrasting tube colour of a rich golden yellow is also desirable (not shown above) perfectly demonstrated here though on 'Gavin ward' winner of 'Best in Show'
Ok is this making sense so far?
I hope so!
As now we move onto the 3 different classes within Show auriculas!

Within this group we have three sub groups.... wow! so complicated eh!
Firstly there are green - This means there is no farina visible on the edge giving a leaf like colour
Secondly White - This is where there is so much farina present around the outside edge of the corolla that absolutely no colour shows through.
and finally one which i have included already a Grey edged form - halfway between the white and green, some leaf colour is present

Credit for pictures above goes to The Northern Section Auricula Show at Cheadle May 3rd 2003
and to auricula and primula.org.uk

This class is pretty self explanatory, A flower that outside of the paste is of one pure colour. As far as colours go pretty much anything is acceptable so long as it is just one colour.
Beautiful gallery of show self auriculas with information on breeding lineage

As i mentioned before this type of auricula was almost lost entirely to growers but in recent years some amazingly dedicated growers have succeeded in not only saving what was left but also breeding new ones! This is a difficult class for the amateur to enter as breeding a striped auricula up to show class is doubly difficult as not only must your 'stripes' be even and regularly spaced they must also reach from the paste to the pips boundary. Recent breeding has improved the genetic stock of this type, there is still a tendency for 'nibbling' to occur on the edges of the corolla preventing a perfectly circular pip. As seen below...
Below is another example of a stripe that has (in my humble opinion) far finer show qualities.
You can clearly see how much more circular and even the pip is on 'Angela short' than on 'Barking' (although both are still beautiful examples) and you'll notice the inclusion of their seedling 'names' this is because, as i mentioned before, a plant cannot be given a proper name until it has won in a show.


Now this is where it starts to get interesting! The definition of a Fancy auricula is basically anything that doesn't conform to the classes mentioned above. Obviously it must conform to the basic auricula standards regarding " flat pips, thrum eyed, circular well defined and proportioned zones, dense unblemished paste" but this class can bring out the most interesting combinations of all three

There are so many beautiful examples in this class but I'll let you investigate further yourself, the above pictures cam from auricula and primula.org.uk fancy auriculas gallery

We have yet to even touch on the subject of Alpine, Doubles (like Miss Sibsey) or border auriculas. Their breeding/propagation or the intricacies of naming them! I'm thinking that for the moment I've given you (and me!) more than enough information to digest. So i am going to split this subject into a third blog. That way we all get a chance to understand what we've read, we don't (hopefully) get bored (bored of auriculas! Never!) and i get a chance to catch up with my housework.... yeah, not so glamorous....

Thank you to all the online resources I've quoted here, without you i couldn't have even have begun to understand this subject.